President Trump has made it clear – both on Twitter and in interviews – that the bull market in stocks reflects the success of his economic policies.

Indeed, Treasury Secretary Steve Mnuchin admitted to CNBC back in February 2017 that the stock market is the Trump administration’s economic “report card…”

This represents an average annual return of 12% – well above stocks’ historical average of 7% per year. 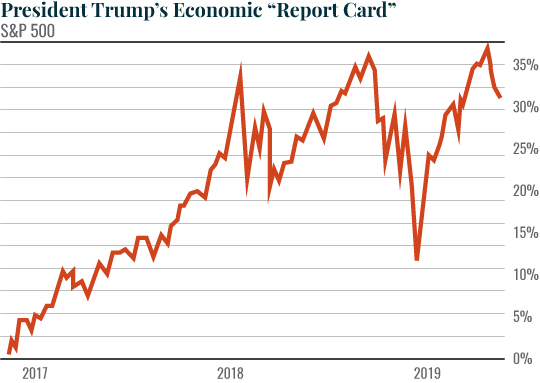 Why bring this up now?

Indeed, the trade war with China is beginning to take its toll on the stock market.

Stocks peaked the week that trade negotiations broke down between the U.S. and China – and they’ve been in a downtrend ever since… 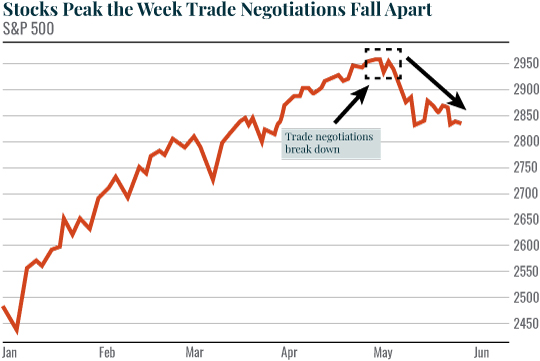 The markets continue to hang on to hope that a trade deal will be reached, but hope is dwindling every day.

And many investors now see the G-20 meeting scheduled for the end of June in Osaka, Japan as the last possible date for President Trump and Chinese President Xi Jinping to reach an agreement.

Put another way, if Presidents Trump and Jinping can’t come to an agreement by then… all bets are off.

If a deal can’t be reached, the U.S. stock market will likely drop hard.

Following China Down a Dark Path 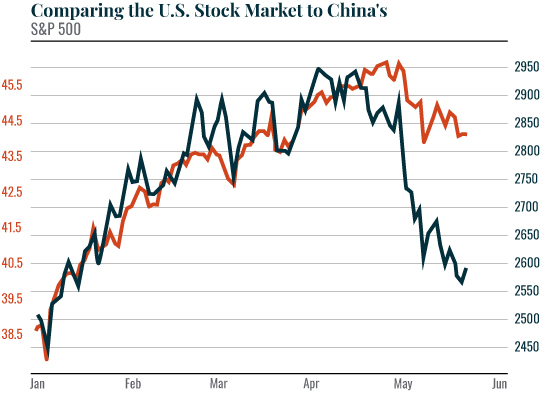 As you can see, the Chinese market took a nosedive starting in early May – when news hit that the U.S. and China couldn’t come to an agreement.

Yes, the U.S. market has performed better. But it won’t be able to avoid a downfall forever…

That’s because the two markets are significantly intertwined.

Currently China’s stock market suggests the U.S. could see its stock market fall to roughly 2,575 on the S&P 500 – nearly 10% lower than where stocks trade today.

What does this mean for us?

It means that now is NOT a good time to put more capital to work based on the idea that stocks will soon explode higher.

Instead, now is the time to be defensive and start preparing for what happens if there’s “no deal” between the U.S. and China.

If you’re looking for investments to profit as the trade deal completely falls apart, I found two that could DOUBLE in the coming months. But I can’t reveal them here.

I’m writing a report on the opportunities and sending it to subscribers of my Strategic Impact newsletter in the next few weeks. I’ll let you know when it hits – along with how to access it.

In the meantime, if you have any questions, comments, or feedback, feel free to send them here.

To understand the situation as it stands today, it’s crucial you read this article.