Yesterday, I outlined how the bond market was flashing a warning signal about the U.S. economy.

In short, the bond market is significantly larger and more sophisticated than the stock market.

Meaning, bonds typically register major changes in the U.S. economy and the financial markets long before stocks, making them a great predictor for what’s to come.

However, as great as the bond market is at predicting economic changes, it’s never a good idea to base your entire investment thesis on a single asset class.

After all, every asset class has its own idiosyncrasies. And sometimes a single asset class can be wrong for a variety of reasons.

Perhaps an investment fund that invests in that asset class is liquidating its positions – resulting in price moves that have nothing to do with fundamentals.

To counteract these kinds of outliers, I like to look at multiple economic indicators before adjusting my economic forecasts.

One of my favorites? Copper.

Copper: The Commodity with a Ph.D. in Economics

When most people think about commodities that are closely linked to the economy, they think of things like oil or steel.

But they’re stopping their line of thinking short.

Copper and its alloys are used in countless ways – ranging from electrical wiring and water pipes to doorknobs and automobile defrosting systems.

In fact, copper has so many economic uses that it’s nicknamed “Dr. Copper… the commodity with a Ph.D. in economics.”

As such, copper is a great indicator of where the economy is headed.

When the economy is growing… copper is in high demand, and copper prices rise.

Let’s take a look at copper’s long-term chart below to illustrate this point.

Highlighted in the first box, you can see that copper prices experienced a sharp rally from 2009-late 2011. This represents a period in which the economy was growing aggressively as the world exited the great financial crisis.

From 2012-2016, copper prices gradually fell bit by bit. This represents a time in which the economy was stagnating. (It wasn’t in a free-fall like that of the 2007-2009 recession, but growth was lackluster nonetheless.)

Now for the third box. 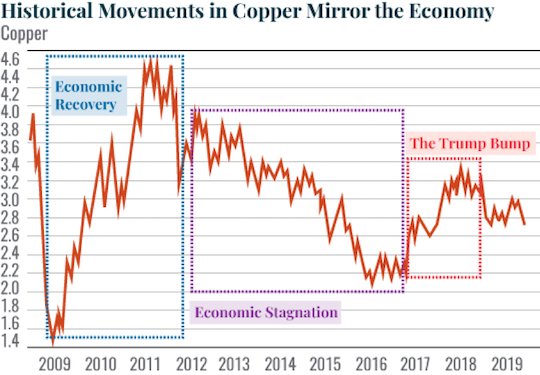 That brings us to today…

Copper prices are once again rolling over – signaling that economic growth is stalling.

Copper and Bonds in Agreement: The Economy is Slowing

We already know that the recent bond yield inversion is a MAJOR warning that the economy is moving into dangerous territory.

Refer to the chart below.

When you overlay the yield on the 10-Year Treasury (blue line) with copper prices (orange line) you’ll find that the two assets are performing in almost the exact same way. 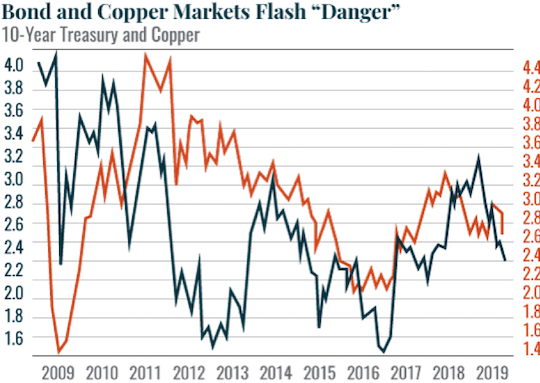 Now, this doesn’t mean that a recession is at our doorstep just yet.

But it IS a warning that one is approaching…

As such, now is NOT the time to put a lot of capital to work in the stock markets to the long side.

Instead, now is the time to be defensive, and start preparing for what happens if the U.S. economy rolls over… and stocks follow suit.

If you’re looking for investments to profit as the wheels come off the economy, I found two that could DOUBLE in the coming months.