Today I want to talk to you about China.

The common narrative today is that China is vying to be the world’s next great super power. And China’s leadership has made it clear that they seek to dethrone the U.S. as the dominant world power.

On the surface, their plan appears to be working. The Chinese economy is now the second largest in the world.

But the common narrative is one gigantic lie. China is putting on a strong face to hide the fact that they are much closer to a crisis than most realize…

The Truth is Told Behind Closed Doors

China’s economic data is total fiction. This is widely known at the top of the political pyramid… but may come as a shock to the average person.

Indeed, this is an open secret in Chinese government.

Former First Vice Premiere of China, Li Keqiang, even admitted to the U.S. ambassador to China that ALL Chinese data – outside of electricity consumption, railroad cargo, and bank lending – is for “reference only.” In other words, the data are “made up.”

Keqiang made this admission back in 2007… over 10 years ago.

That means that China has been “cooking the books” for decades, overstating growth and understating the risks to their economy/ financial system.

Based on some research, China’s economy is currently growing by 2% at best…

And some estimates have China already in a formal recession.

Everyone likes to point out that the U.S. has too much debt. In reality, China is in MUCH worse shape… it’s just better at hiding it.

Remember, China is fundamentally a command economy – an economy in which production, investment, prices, and incomes are all determined by the government.

As such, the government owns most of the large companies in China, called State Owned Enterprises (SOEs). China uses these to hide its debt loads…

Because SOEs are technically companies – not the government itself – China doesn’t have to report their debt loads in its official debt data.

But before you get too comfortable, China’s debt games extend even further than that.

You see, the bulk of China’s debts are in its unregulated Shadow Banking Sector…

The phrase “Shadow Banking” sounds like something out of a Harry Potter novel. But the term really just refers to banking that’s “totally unregulated, and therefor rife with systemic risk.”

Getting your hands on China’s Shadow Banking data is extremely difficult. However, China’s Central Bank does publish an annual report that provides some details on this stuff.

According to China’s Financial Stability Report for 2018, the country has added $50 TRILLION in new financial assets (DEBT) to its financial system in the last FOUR years.

Consider that China’s entire economy is only $12 trillion. So based on the report, it expanded its debt load by 400% of its GDP… in FOUR YEARS TIME.

Oh, and nearly all of this debt (78%) was in SHADOW financial assets – assets that are completely unregulated with the WORST underwriting standards.

Now you can begin to understand why our President is playing “hard ball” with China during the trade negotiations. He understands that China is actually in much worse shape than the official data suggests.

For good measure, there is one other indicator confirming this…

One look at the stock markets will tell you that the Chinese stock market isn’t as strong as the official data would have you believe. 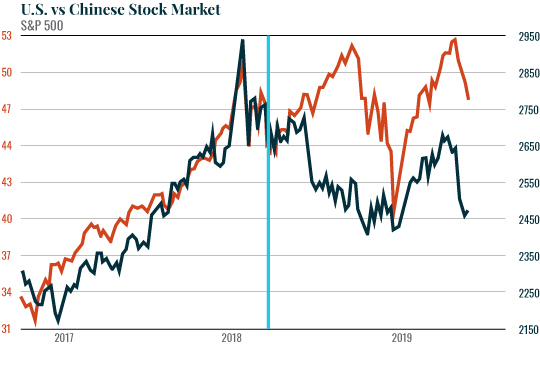 While it remains unclear how the Trade Deal will be resolved, one thing is clear: China is in a weaker position than the U.S.

If you’re looking for investments to profit as China continues to collapse, I found two that could DOUBLE in the coming months.

Part 4: Stocks Will Hold Up a Week of Two More, Then Look Out

Right now we have stock market participants who are almost 100% certain the Fed will cut rates again and again… at a time when the Fed itself isn’t interested in cutting rates at all.

While it’s nice to see stocks rallying so much, we need to consider what might be coming down the pike in the near future. Bonds suggest it’s nothing pretty.