The media continues to miss the big story regarding the U.S.-China Trade War…

If you went by the headlines alone, you’d think that the U.S. was in the weaker position.

Time and again, the media portrays China as the U.S.’s equal – a global superpower that could cripple the U.S. economy by dumping our debt, or some other strategy.

But all of these stories exclude the single most important issue, what I call America’s “secret weapon”…

This is something that has the ability to CRIPPLE China’s financial system, effectively losing them the trade war.

This weapon? The U.S. dollar.

The Significance of the U.S. Dollar to Global Trade

The U.S. dollar is the reserve currency of the world. Meaning, it’s the monetary lubricant that makes the global economy run.

All told, the U.S. dollar makes up 86% of all currency transactions.

For example, if a Chinese firm wants to make a deal with a German firm, it doesn’t simply convert its Chinese yuan to euros. It first converts its yuan to U.S. dollars, which are then converted to euros.

Over the last 20 years, China in particular has been extremely aggressive in seeking international deals with other countries.

Of course, that means that China needs U.S. dollars – a lot of them.

All told, Chinese firms have over $2 trillion in external debt… debt they owe to international investors.

Almost ALL of this is denominated in U.S. dollars.

As a result of this, Chinese firms need at least $100 billion in U.S. dollars per year to service their external debts.

Now, this is a precarious situation under any circumstances. But when the U.S. dollar is RISING against the yuan, it becomes almost impossible.

Here’s why: If the U.S. dollar rises against the yuan, it becomes more expensive for Chinese firms to pay the debt they owe foreign creditors back.

And the U.S. dollar has been strengthening a LOT over the last two years…

Because President Trump told the Fed to aggressively raise interest rates on the U.S. dollar. This is the country’s “secret weapon”…

The U.S. formally entered into a trade war with China on March 22, 2018, when it announced tariffs on $60 billion of Chinese goods sold to the U.S.

Since that time, the U.S. dollar has risen nearly 10%.

This has been fueled by the Federal Reserve’s repeated interest rate hikes, and its quantitative tightening (QT) program – which has since taken over $600 billion U.S. dollars out of the financial system.

As a quick reminder, QT is the program through which the Fed allows the bonds it owns to mature. Meaning, it gets paid back by the borrower before the Fed returns the money to the U.S. Treasury, thereby removing U.S. dollars from circulation.

Over the same time period, China’s stock market has collapsed some 20%, formally entering a bear market.

Take a look at the chart below, tracking U.S. dollar performance (in orange) versus the China stock market (in blue) since the trade war began.

As you can see, once the U.S.-China trade war began in earnest, the U.S. dollar soared, putting incredible pressure on China’s stock market, which has since collapsed… 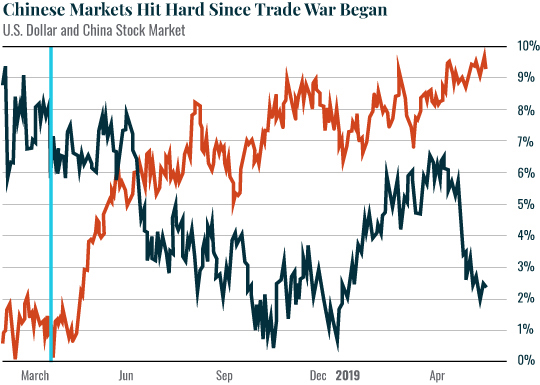 So China will either have to accept Trump’s demands… or suffer a systemic collapse.

And either way, China is going to “lose” the Trade War.

If you’re looking for investments to profit as China continues to collapse, I found two that could DOUBLE in the coming months.

The world is running out of U.S. dollars. This is the single biggest issue facing the global financial system today…

Part 3: The Biggest Opportunity in the Markets Today