Bonds Say the Fed Will Have to Cut Rates Soon…

Now, the U.S. central bank (Federal Reserve or “the Fed” for short) is in the difficult position of trying to stop this from happening…

Will the Fed be able to act quickly enough?

The bond market is suggesting it’s already too late…

Bonds Price Risk Based on the Fed’s Interest Rate Policy

As usual, we first need to understand what the markets should look like – before we can identify the system breaking down.

The Effective Federal Funds Rate is the interest rate range the Fed sets for the financial system.

Let’s say the Fed sets interest rates for 0.5-0.75%. In normal conditions, you should see the yield on Three-Month Treasuries trading at roughly the same levels.

Meanwhile, yields on longer-term Treasuries, say Two-Year Treasuries, should trade higher than the interest rate range. That’s because investors typically demand a greater return for lending their money to the U.S. government for a longer time period.

That’s how things are supposed to work.

But it’s not how they’re working right now…

The Fed is Behind the Curve and Might Be Too Late

Currently, the yield on the Two-Year Treasury is trading BELOW the Fed’s Effective Federal Funds Rate.

This is illustrated on the chart below, with the Two-Year Treasury in blue, and the Effective Federal Funds Rate in orange. 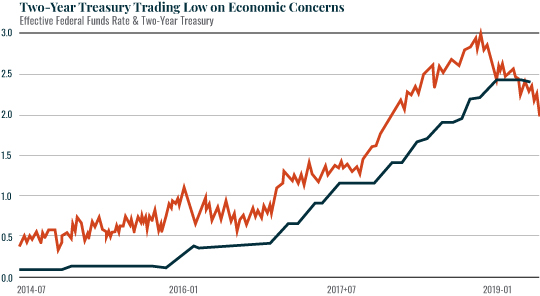 So what does this mean for the economy?

This means that bond investors are so worried about the U.S.’ economic future… that they’re willing to lock up their money for TWO YEARS at a rate of return that is LOWER than what they should be paid for lending their money for just three months…

Put another way, bond investors are EXTREMELY worried about the near future – to the point that they are ignoring the Fed’s official policy.

This is about as close to a formal declaration that the Fed has “screwed up” as you can get, without an outright crisis underway.

Add this indicator to the yield curve inversion I told you about last week, and all signs are pointing to a recession.

Now, the Fed’s next meeting to determine interest rate policy is June 18-19.

There are two potential outcomes from the meeting…

And remember, Treasury yields are ALREADY telling us the S&P 500 should be trading 13% lower than they are today.

Take a look at the chart below to see what I mean. Stocks are marked in orange, Treasury yields in blue.

Since the bond markets are a great indicator for where the markets are headed… it’s only a matter of time before stocks catch up with them – by falling. 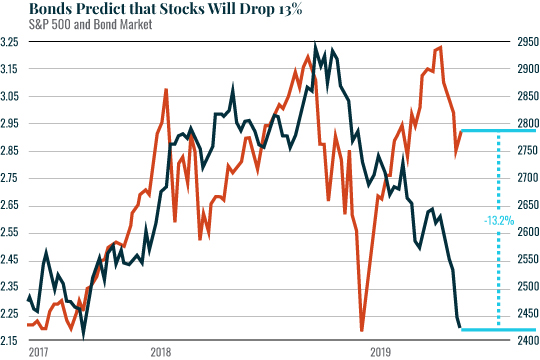 Until now, stocks have held up at these lofty levels based on hopes that the Fed will cut interest rates soon. But if the Fed doesn’t, stocks might “close the gap” by falling violently.

Of course, I can’t pretend to know what the Fed will do. But based on the above analysis, I would steer clear of committing any new capital to the stock market right now.

If anything, I would look to get as defensive as possible with any new trades…

If you’re looking for investments to profit as the wheels come off the economy, I found two that could DOUBLE in the coming months.

A Mutiny is Underway at the Fed

And as of yesterday, there is now a frontrunner to replace Powell as Fed Chairman.