Thus far in our analysis of the bond market, we’ve focused on what bonds are predicting for the U.S. economy in the next six months.

For those of you with busy schedules, the most salient points regarding bonds were:

Today, I want to put this recent downturn for bonds into perspective – particularly in terms of what it means for the next crisis…

The Single Most Important Bond on the Planet

This is because a typical economic cycle (both the boom and the bust) lasts about 10 years. As such, the 10-Year U.S. Treasury is perhaps the best barometer for the U.S. economy in the bond market.

That’s why it’s crucial that we pay extra attention to what this bond is doing.

With that in mind, let’s look at the single most important financial development of the last 35 years, shown on the chart below.

The chart tracks the YIELD on the 10-Year U.S. Treasury.

As you can see, in early 2018 the yield on the 10-Year U.S. Treasury broke out of its long-term downtrend. 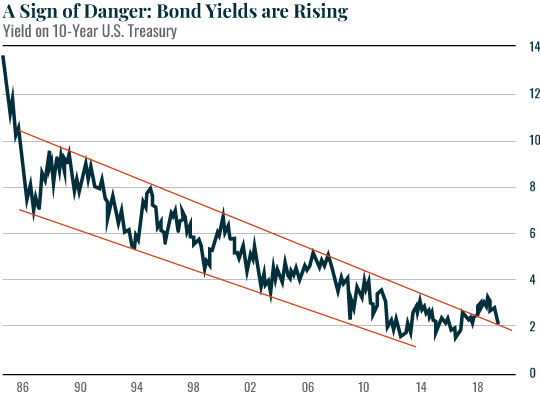 This breakout signaled to the world that the 40-year bull market in bonds was ending… which is a MASSIVE deal.

As I outlined in my bestselling book The Everything Bubble: the Endgame For Central Bank Policy, U.S. Treasury bonds are the bedrock of our current financial system…

The yields on these bonds – particular that of the 10-Year U.S. Treasury – represent the “risk-free” rate of return. Or, the rate against which all risk assets (stocks, commodities, mortgages, gold, you name it) are priced.

So if bond yields rise – like we just saw on the chart above – bond prices fall.

What happens when bond prices fall?

The financial system comes under duress because debtors are forced to pay higher interest payments on their debt.

This is why the U.S. Central Bank (the Federal Reserve or “the Fed” for short) panicked late last year…

This is also why the Fed is currently talking about cutting interest rates – despite the U.S. economy growing at 3% and unemployment near record lows.

Put simply, the Fed is terrified that if it can’t “patch” over the burst Everything Bubble, the financial system will soon enter another crisis.

Now, I realize all of this sounds extreme. But the big picture for the stock market is saying the same thing…

A Bleak Outlook for Stocks in the Near Future

Take a look at the chart below.

And now, the S&P 500 has just broken through a third bull market trend line… 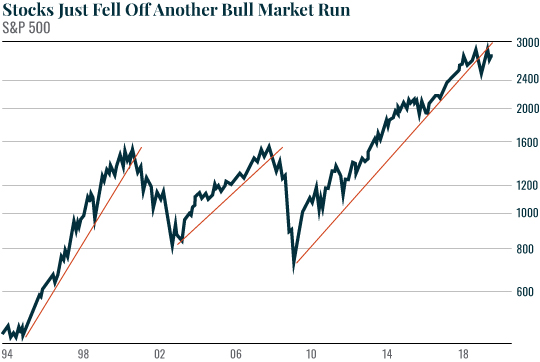 The question remains: Can the Fed fix this situation?

I can’t say for certain.

Over the next six months, I expect the Fed will begin introducing a number of new, extraordinary monetary policies – policies I predicted over two years ago in my book The Everything Bubble: the Endgame For Central Bank Policy – that will determine the fate of the stock market.

On that note, if you’re looking for investments to profit from the Fed’s future plans, I recently found two that could DOUBLE in the coming months.