Yesterday I outlined how the Everything Bubble has burst – signaling the financial system might be headed for another crisis.

The first thing the Fed will do is cut interest rates – and hope this is enough.

Of course, when we talk about the Fed raising or cutting interest rates, we’re not talking about the Fed moving a physical thing.

What we’re actually talking about is the Fed publicly voicing the interest rate levels at which it will intervene in the banking system.

Based on regulations, every bank in the U.S. must maintain a certain amount of capital with the Federal Reserve.

This capital is meant to act as a buffer if the financial system comes under duress and banks need access to capital quickly.

However, sometimes banks have extra capital lying around. They’ll lend this extra capital to other banks through the Fed’s banking system as a means of making some extra money.

The rate of interest that the first bank charges the second bank in this scenario is called the Fed’s Target Federal Funds Rate. This is how the Fed controls the “cost of money” in the financial system.

Let me give you an example.

As long as banks are lending capital to one another in this range, the Fed is happy.

But let’s say that banks start to get nervous and start requiring a higher rate of return for access to capital, say 1%.

This is above the Fed’s desired range.

In order to get back to its desired range, the Fed will intervene by buying securities from the banking system.

When the Fed buys securities from the banking system, it’s taking assets OUT of the system (and onto the Fed’s balance sheet) and putting more money INTO the system.

This increases the amount of money in the financial system. And when there is more money in the system, money “costs” less to lend out, forcing rates to go lower.

The same thing can also happen in reverse…

Let’s say again that the Fed wants rates between 0.50% and 0.75%. But the Fed observes that banks are lending money to one another for only 0.3%.

If banks are lending money below the Fed’s desired range, that means that money is too “cheap” – there is too much of it in the banking system.

This time, the Fed steps in and sells securities that it owns from its balance sheet.

When it sells securities, the Fed is putting assets INTO the financial system and taking money OUT.

This reduces the amount of money circulating in the financial system, making money more “expensive”, and causing rates to rise.

This is how the Fed controls the “cost of money” for banks, keeping things at its Target Federal Funds Rate.

Intervening in the Current Financial System

Now let’s apply all of this to present day.

The question remains: Will the Fed be able to “patch” the Everything Bubble by doing this?

History would suggest this will NOT work…

The Fed is Behind the Curve

The unfortunate news for investors is that historically, the Fed has been “behind the curve” when it comes to lowering interest rates to support the economy.

Take a look at the chart below.

Meaning, slashing rates was not enough to prevent a downturn. 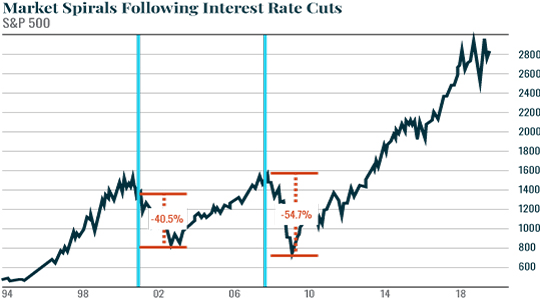 Of course, this time around things could be different…

But I doubt it.

Which is why I expect the Fed will begin introducing a number of new, extraordinary monetary policies over the next six months… policies far more extreme than just interest rate cuts…

I’ll outline one of them in Monday’s edition of Money & Crisis.

In the meantime, if you’re looking for investments to profit from the Fed’s future plans, I recently found two that could DOUBLE in the coming months.

New members to my most explosive project to date just scored a quick 26% gain – in the time it took to drink a cup of coffee!