Last week I outlined how the Everything Bubble has burst…

The Fed’s first attempt to “patch” it back together – cutting interest rates – will very likely fail.

This is what we covered Friday.

You see, historically the Fed has been “behind the curve” when it comes to lowering interest rates to support the economy. This is unfortunate news for investors.

Take a look at the chart below to see what I mean.

Meaning, slashing rates was not enough to prevent a downturn. 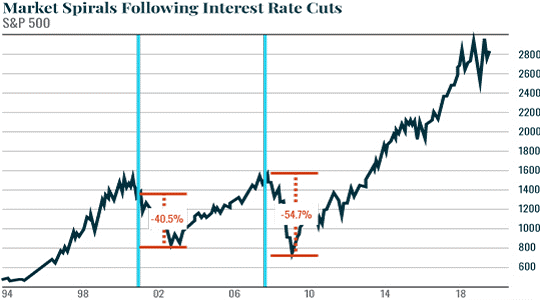 Of course, this time around things could be different…

But I doubt it.

Which is why I expect the Fed will be forced to implement even more extreme policy measures to support the economy and stocks.

One of the most extreme policies will be to announce a new, MASSIVE, continuous form of Quantitative Easing (QE).

The Fed is Prepping the Printing Press For What’s Coming

If you’re unfamiliar with QE, it’s a monetary program through which the Fed prints new money and then uses it to buy debt from bank/financial institutions, in turn hoping to lift the financial system.

Between 2007 and 2014, the Fed spent over $3.5 trillion doing this. And during its most aggressive campaign, the Fed was printing over $80 billion in new money per month…

When the next downturn hits the market, I expect it will spend even more. I’m talking $100 billion, and possibly even $200 billion in money printing per month.

Because the Fed knows that if it fails to hold the Everything Bubble together, the entire financial system will collapse.

Remember, the Fed has admitted that the entire U.S. financial system and the U.S. economy have become one gigantic, leveraged bet on interest rates staying low.

And for bond yields to stay low, bond prices have to rise.

QE has proven to be the Fed’s most effective method for pushing bond prices higher during a weak economy.

The chart below (of bond prices) illustrates this point. 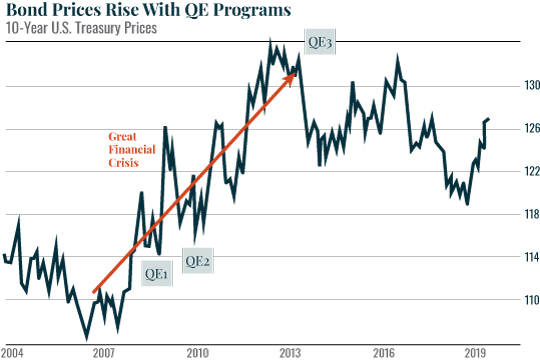 When push comes to shove, the Fed would rather go NUCLEAR with QE than risk blowing up the bond market and Everything Bubble.

This is why I fully believe MONTHLY QE programs of $100-200 billion are coming in the future.

Those investors who are properly positioned for this will make literal fortunes.

On that note, I recently found two investments that could DOUBLE in the coming months as the Fed shifts into monetary easing mode.

Bonds Say the Fed Will Have to Cut Rates Soon…

Last week I noted that two important asset classes were warning that the U.S. economy had begun to weaken dramatically. Now the Fed is in the difficult position of trying to stop this from happening…