As a brief recap, let’s outline the key points:

The question for investors is… What investments will perform best during this period?

The first one that comes to mind is Gold.

Since peaking at a little over $1,900 per ounce in 2011, Gold prices have been consolidating for most of the last eight years. 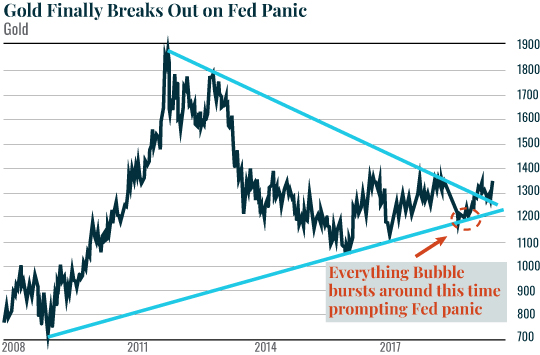 And as the Everything Bubble began to burst and the Fed began to panic, Gold has recently broken out of this formation to the upside.

This recent move in Gold is a clear signal that the precious metal is preparing for another bull market.

I expect we’ll see Gold eventually move north of $2,400 per ounce in the coming years as the Fed is forced to print even more money in its attempt to “patch” the Everything Bubble back together.

I want to warn you that we won’t get there quickly… so don’t rush out and bet the farm on a rapid rise in Gold.

However, with the right investments and careful risk management, those investors who are properly positioned for this will make literal fortunes.

On that note, I’m about to tell subscribers of my Strategic Impact newsletter about a unique play on Gold that has the potential to DOUBLE in the coming months…

President Trump realizes that World War III is about to start. And this time, the weapons won’t be bullets or bombs. They’ll be currencies and debt.