Be careful what you wish for!

It’s commonly believed that when the Fed cuts interest rates it’s a good thing for stocks.

While this is generally true, there are certain exceptions. And a big exception is if the Fed is cutting rates because the economy has rolled over into a recession.

Take a look at the chart below to see what I mean. 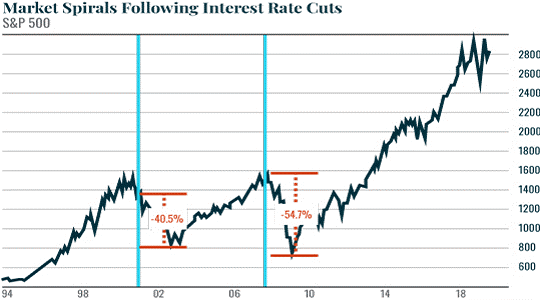 With this in mind, I’m feeling extremely cautious about the benefits of the Fed cutting interest rates at its meeting next week.

The Fed meets next Tuesday and Wednesday, June 18-19. The market is anticipating that the Fed will cut interest rates at this meeting, and then at least two more times this year.

Indeed, this belief has been the primary driver for why stocks have been roaring higher from their December 2018 lows…

The chart below of the S&P 500’s performance illustrates this point. 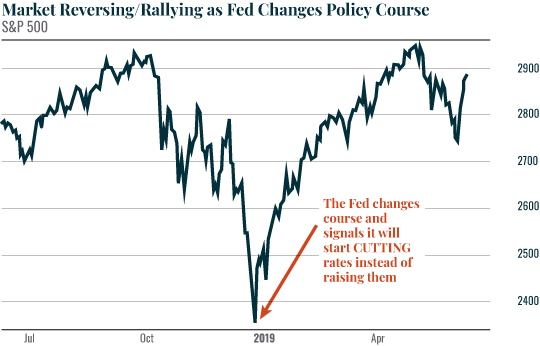 But what if the market is WRONG about rate cuts this time, and we’re in a situation in which the economy is rolling over into recession?

Important Assets are Flashing “Danger” for the Economy

We’ve noted in recent articles that bond yields (or Treasuries) and Copper are both great indicators for where the economy is headed.

The yield on the 10-Year Treasury closely tracks economic growth.

And Copper is an industrial metal that is so closely associated with economic growth, that it’s called “Dr. Copper… the commodity with a PhD in economics.”

Today there’s a third asset I’d like to discuss that’s also a great indicator for where the economy is headed: FedEx (FDX).

FedEx is the largest private mail carrier/shipping company in the U.S.

With all three of these assets in mind, take a look at the chart below.

As you can see, the 10-Year Treasury, Copper, and FedEx are all down right now while stocks are up. This tells us that stocks are WRONG… and our economic indicators are flashing warning signs to the stock market. 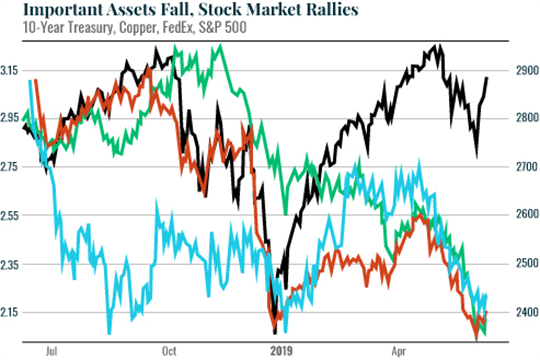 But to have ALL THREE of them saying the same thing? That’s REALLY cause for concern!

Unlike most investors, I’m preparing for a scenario in which a Fed rate cut is in fact a BAD thing based on the economy rolling over.

On that note, I’m about to tell subscribers of my Strategic Impact newsletter about two investments that could easily DOUBLE as the wheels come off the economy in the coming months.