In yesterday’s article, I pointed out that there are times when a rate cut by the Fed isn’t enough to boost stocks.

And I’m afraid it’s going to be the case when the Fed starts cutting rates this year – whether it be at the Fed’s meeting next week, or later this year.

Some of you are no doubt saying: “Wait a minute, Graham, the economic numbers look great. So how can you claim the economy is rolling over into recession?”

My answer is simple.

Economic data is backwards looking – meaning it tells you what has already happened.

Financial markets are forward looking – meaning they are discounting what’s about to happen.

With that in mind, we’ve noted in recent articles that three of my favorite forward-looking assets are all sending warning signs about the economy.

Important Assets are Flashing “Danger” for the Economy

Those assets are bond yields (or Treasuries), Copper, and the share price of shipping giant FedEx (FDX).

By way of quick review…

The yield on the 10-Year Treasury closely tracks economic growth.

Copper is an industrial metal that is so closely associated with economic growth, that it’s called “Dr. Copper … the commodity with a PhD in economics.”

And FedEx is the largest private mail carrier/shipping company in the U.S.

All three of these assets are warning that the economy has rolled over recently.

As you can see, the 10-Year Treasury, Copper, and FedEx are all down right now while stocks are up. This tells us that stocks are WRONG… and our economic indicators are flashing warning signs to the stock market. 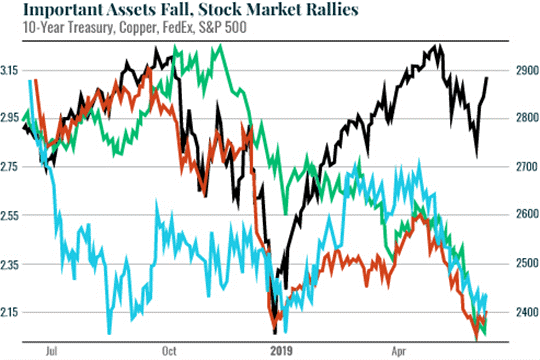 Oil Joins the Ranks in Predicting an Economic Downturn

With the exception of maybe Copper, oil has more uses than any other commodity.

With this in mind, oil’s price – like that of FedEx (FDX) or Copper – can provide a glimpse into what’s happening in the real economy.

This is particularly true in situations in which geopolitical risk is subdued in oil-producing regions like the Middle East. During those periods, oil is even MORE closely aligned with the real economy.

Which is why I note with some concern that oil’s price has begun to collapse – falling away from that of the stock market and warning us that the real economy is in serious trouble.

Simply take a look at the chart below to see what I mean.

Oil (in dark blue) is behaving like the other assets we’ve discussed, while stocks (in orange) remain high. 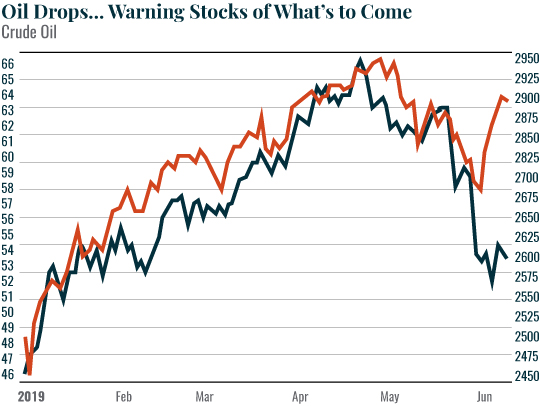 So we now have Treasury Yields, Copper, FedEx (FDX) and Oil all warning us that the “wheels have come off” the economy…

To have even one of these assets warning us about the stock market is enough to pique my interest.

But to have ALL FOUR of them saying the same thing? That’s REALLY cause for concern!

Unlike most investors, I’m preparing for a scenario in which a Fed rate cut is in fact a BAD thing based on the economy rolling over.

On that note, I’m about to tell subscribers of my Strategic Impact newsletter about two investments that could easily DOUBLE as the wheels come off the economy in the coming months.