Over the last two weeks, I’ve been warning that multiple forward-looking assets are sending warning signs about the economy.

As a brief recap, those assets are bond yields, copper, the shipping company FedEx (FDX), and oil.

All four of these assets are great indicators of where the economy is headed. 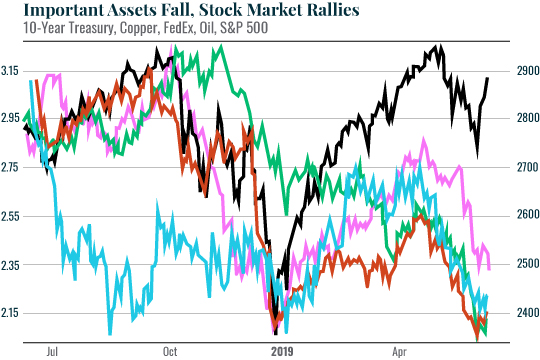 By now, I’m certain many of you are saying: “OK, Graham, I get it… the economy is rolling over. But where do I put my money to profit from this?”

Long-Term Bonds: The Inverse to a Down Economy

One of the best places to park capital during an economic downturn is in long-term U.S. Treasury Bonds.

The U.S. government controls the world’s reserve currency – the U.S. dollar. So the U.S. is always able to print new dollars to pay back investors who loaned it money.

As a result, the U.S. has never formally defaulted on its debt, unlike Germany and other developed nations.

This is the kind of certainty nervous investors love. Whenever things look scary in the financial system, investors all around the world flock to U.S. debt…

In particular, long-term U.S. debt (Treasuries that mature in 20 years or more) does well during economic downturns as investors look for a place to park capital that will last until the storm has passed.

See for yourself on the chart below… 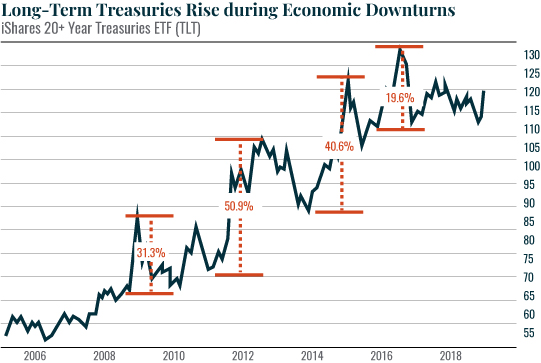 Put simply, whenever the financial system gets into trouble, long-term bonds explode higher.

A Simple Vehicle For Playing This Trend

One means of playing this trend is the iShares 20+ Year Treasuries ETF (TLT).

That’s a complicated name, but all it really signifies is a bond fund that invests exclusively in long-term U.S. Treasury bonds.

The chart below tracks the ETF’s performance.

Recently, this bond fund broke out of a downtrend (blue lines in the chart below). It’s since rallied to test its all-time highs of $131 or so. 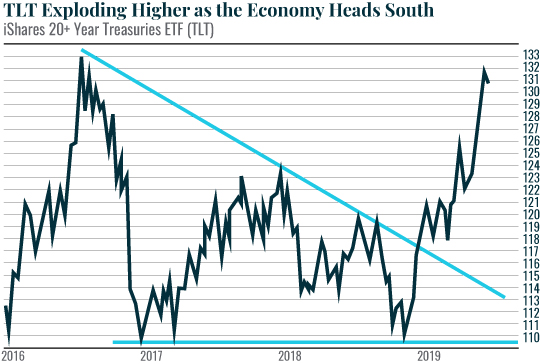 I first told readers about this bond fund in late May. Already, it’s up 4% including dividends…

We’re due for a “cooling period” here, so I wouldn’t rush out to buy TLT today. But put it on your radar for later this summer as things take a turn for the worse…