The Federal Reserve meets tomorrow and Wednesday of this week.

According to the latest predictive data, there is only a 32% chance that the Fed will cut rates at this meeting…

However, the data also says there is a 67% chance the Fed will cut rates in July…

And another rate cut sometime between September and year-end.

In other words, the markets are forecasting the Fed will cut rates THREE times this year.

If this proves to be the case, it will represent one of the most rapid U-turns in Fed policy in history.

That’s because this time last year, the Fed was about to RAISE rates for the second time in 2018.

The Fed would also go on to rate rates another TWO times that year – for FOUR rate hikes total.

The Fed was ALSO shrinking its balance sheet at a pace of $50 billion per month, or $600 billion per year at the same time.

Why is that important? Every $200 billion in balance sheet reduction was the equivalent of a rate hike.

So the Fed would technically do the equivalent of SEVEN rate hikes in 2018 (four actual hikes and three “hikes” via its balance sheet reduction).

Put simply, the Fed is going to go from raising rates seven times… to CUTTING rates THREE times… in the span of 12 months.

What could prompt such a crazy series of events?

The Fed now realizes that it has burst the Everything Bubble.

How Our Current Financial System is Structured

Before we move any further, we need to first understand how the Fed got here.

As I explained in my bestselling book The Everything Bubble: The Endgame For Central Bank Policy, when then-President Richard Nixon ended the gold standard on August 15, 1971… the U.S. dollar was completely severed from its link to gold.

Up until this point, gold had been the de facto backstop for the financial system.

So when the gold standard was broken, it raised the question: What would be the new backstop for the financial system?

From this period onward, the U.S. government would pay its debts solely in U.S. dollars – dollars that the Fed could print at any time.

Of course, as a result the U.S. government has never formally defaulted on its debts.

This in turn established Treasuries as the only real “risk free” investment on the planet – with the yields on these bonds representing the “risk free” rate of return against which every other asset class would be valued.

So starting in the early ‘70s, Treasuries became the bedrock of the financial system.

This is why when the Fed later chose to create a bubble in these bonds after the 2008 Crisis, EVERYTHING got bubbly (hence my coining the term, The Everything Bubble).

With this in mind, the one thing that would truly panic the Fed today is if the yields on Treasuries began to spike.

Which they did in mid-2018, rising above their long-term downtrend. 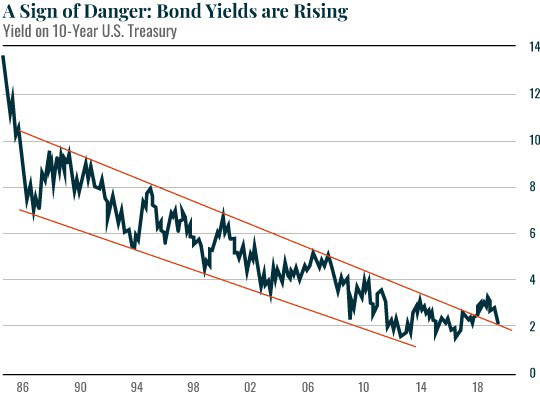 The Fed is desperate to get bond yields back into their long-term downtrend.

And if you take a second look at the chart above, you can see that it appears to be working…

Bond yields have rolled over and are on the verge of moving back into their down-trending channel.

This is the BIG STORY for the financial system today, which is why the next few Fed meetings are SUPER important.

If the Fed cannot successfully “patch over” the Everything Bubble by getting bond yields back into a downtrend, the U.S. will enter a debt crisis.

Here at Money & Crisis, we’ll be monitoring this closely.