Having been active in the financial markets for the better part of two decades, I’ve seen a lot.

I’ve seen the 2008 Crisis… the Fed cut rates to ZERO… the Fed print over $3 trillion in NEW money and use it to buy debt from Wall Street… and more.

Put another way, at this point in my career it takes A LOT for me to spit out my morning coffee in amazement at scheming done by our Central Bank.

Unfortunately, that is precisely what happened this morning – when I got to the last paragraph of an interview with former vice chairman of the Fed, Stanley Fischer.

During a private talk in Israel, Stanley Fischer stated that the Fed might not have raised rates last December if President Trump had not been so critical of the Central Bank’s policies.

This statement has massive implications.

That said, I realize the seriousness of this might be lost on many of you. So let’s turn back the clocks six months…

Going into December 2018, the Fed had already raised rates three times that year.

As if that wasn’t enough, the Fed had also already drained nearly $400 billion in liquidity from the financial system, as it closed out bond positions it owned in a process called Quantitative Tightening (QT).

And bear in mind, every $200 billion in QT is like another rate hike. So altogether, the Fed had done the equivalent of SIX rate hikes that year.

To give this some perspective, this would be the single most aggressive Fed Policy in history.

The markets had taken note, falling 10% in October before moving back and forth as they waited to see what the Fed would do in December.

The chart below illustrates this back-and-forth behavior. 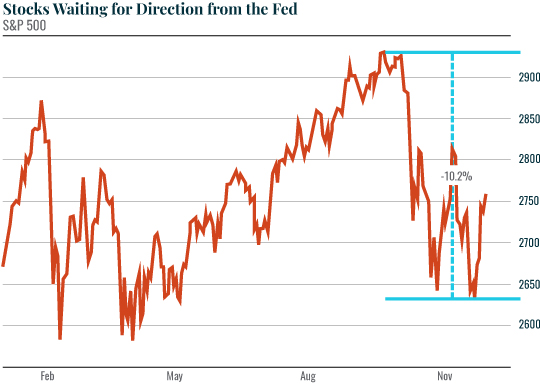 To top it off, Fed Chair Jerome Powell reiterated in his public statements that the Fed had no intention of slowing the pace of rate hikes OR of its QT program, which was now draining $50 billion in liquidity every single month.

The stock market entered a free-fall on the news, shown on the chart below. 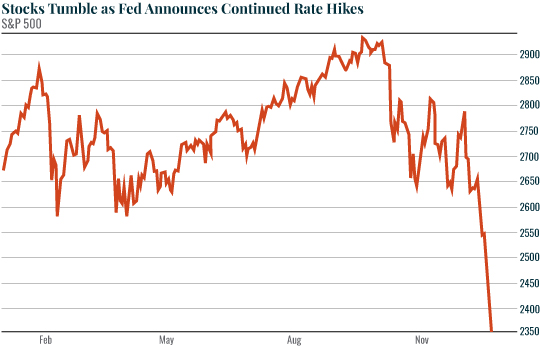 Knowing all of this, let’s return to present day, and Stanley Fischer’s shocking comments.

Did the Fed Hurt the Markets to Spite the President?

One of the most connected former Fed officials on the planet just claimed that the Fed might have enacted all of these policies to “get back” at President Trump for criticizing it publicly.

If there is any truth to this, the Fed committed economic terrorism for political purposes…

Remember, raising rates doesn’t just hurt the stock market, it also impacts the economy. And it’s no coincidence that the U.S. economy started 2019 with the lowest growth since the President was sworn into office.

This is an absolute game changer. It dramatically raises the stakes and the scrutiny of what the Fed does later this week, and for the rest of 2019.

Previously I had thought the Fed might not cut rates on Wednesday at its meeting.

But based on the article published Sunday, I’m beginning to wonder if the Fed might have to ease aggressively if it wants to get back in the President’s good graces…

I’ve already shown investors one way of playing this trend – an investment that’s already up over 5% in the last two weeks.