For years, gold has been mocked by the financial media.

The primary argument against the precious metal is that unlike stocks, bonds, or currencies, it doesn’t pay a dividend/yield.

As Warren Buffett once famously quipped… gold just sits there and “looks at you.”

However, in the last few years all of this has changed.

The Latest Round of Monetary Insanity

Central banks around the world are working to prevent the Everything Bubble from deflating. One such strategy central banks use is cutting interest rates into negative territory.

What this means is that YOU have to PAY the country for the right to LEND IT money.

I know – it sounds ludicrous. But thus far it has worked without investors bailing…

As I write this, the Japanese Central Bank (called the Bank of Japan or BoJ) has cut rates to negative 0.1%.

The central bank in Europe (called the European Central Bank or ECB) has cut interest rates down to negative 0.4%.

Now, remember, the bond markets take their cues from central banks – even if it means following interest rates into negative territory.

Today there are over $11.6 TRILLION worth of bonds with negative yields.

And investors holding these bonds are PAYING LITERAL MONEY to own them.

Meaning that all of a sudden, gold – which yields ZERO – is actually an attractive investment compared to these bonds.

Gold is Priced in Much More Than Just Dollars

For those of us who live in the U.S., every asset we look at is priced in U.S. dollars.

However, for investors elsewhere in the world assets can be priced in European euros, Japanese yen, Swiss francs, and other currencies.

Gold is no exception…

I recently noted that gold is breaking out against every major currency – and the charts below stand as proof.

Take a look at the chart below. In this chart, gold is priced in U.S. dollars.

As you can see, gold has broken its downtrend. 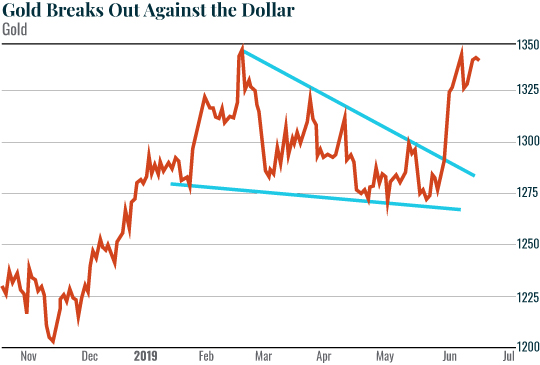 Below you’ll find a chart with gold priced in euros. Here again, gold has broken its downtrend. 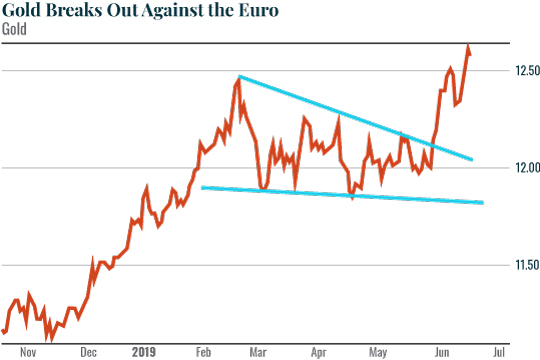 Now for a chart showing gold priced in Japanese yen. Again, gold has broken its downtrend. 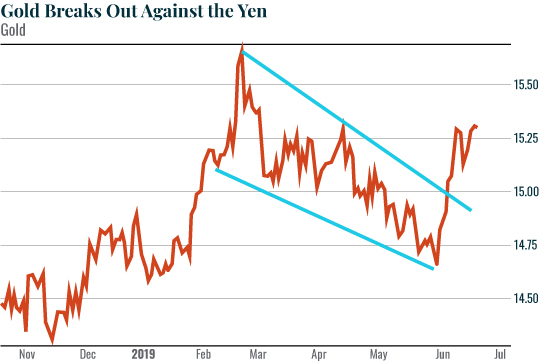 And finally, here’s a chart with gold priced in Swiss francs. You guessed it – gold has broken its downtrend. 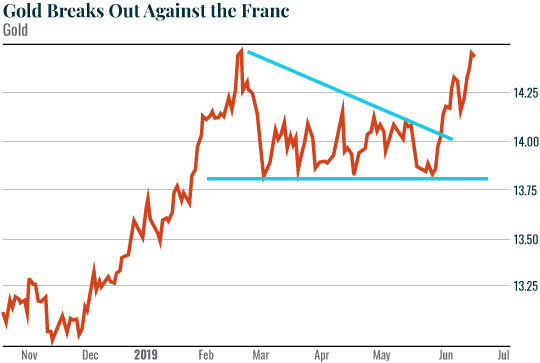 Gold’s breakout against every major currency is the start of something major.

And as more and more central banks are forced to cut rates to negative to try and stop the Everything Bubble from deflating, gold will enter a bull market to new highs.

I’ve already shown investors one way of playing this central bank screw-up – an investment that’s already up over 5% in the last three weeks.

I’m now preparing for an even more aggressive strategy to profit from the next round of central bank policies.