The Fed failed to cut rates at its June meeting last Wednesday.

However, if you went by what the financial media claims, you’d think the Fed was prepared to launch an aggressive round of monetary easing — starting with a massive 0.5% rate cut at its July meeting next month.

I’ve actually read the Fed’s published statement and I can’t find anything to support this claim. At the very best, you could argue that the Fed is less certain about raising rates…

Nowhere — and I do mean NOWHERE — in the Fed’s published statement is there anything to suggest the Fed is about to cut rates.

The smart money agrees with me.

The financial media likes to focus on stocks because they are an extremely volatile asset class. This volatility makes stocks seem “sexy” – since entire fortunes can be made (or lost) within a matter of weeks.

However, the reality is that stocks are actually one of the smallest asset classes on the market.

The global stock market is worth roughly $70 trillion. By comparison, the bond market (also called the debt markets) is worth well over $217 trillion.

And the currency markets are even bigger!

This is roughly the size of Japan’s ANNUAL economic output.

Currency Markets Are Ahead of the Game

The larger and more liquid an asset class is, the more quickly it adjusts to changes in the global economy.

This is why the currency markets typically pick up on things before stocks.

Put another way, stocks are always last to “get it.”

With that in mind, take a look at the U.S. dollar.

The U.S. dollar has fallen… but it continues to hold its bull market trend line which is shown by the black line. It is also well above critical support as you can see with the blue line. 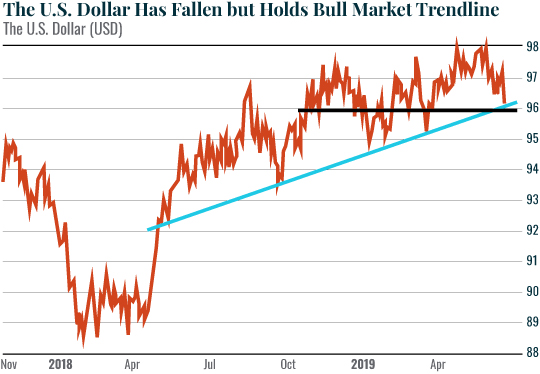 If the Fed were indeed about to start easing monetary policy aggressively, the U.S. dollar would have broken both of these.

Of course, this could change in the future. But right this minute, the largest, most sophisticated market on the planet is telling us that a rate cut is NOT a sure thing.

Put simply, the U.S. dollar is telling us to “wait and watch.”

One of the most important aspects to successful trading is to know when to sit still. Right now is one of those times. The markets will tell us what’s coming, we just need to be a little more patient.

On that note, I’ve spent the last four months developing a unique strategy to profit from Central Bank monetary policies.

Thus far the results are truly incredible… in the last two weeks, this system has locked in a 100% gain in four days… and a 67% gain in just two days.

I’ll tell you all about it in the coming weeks… but in my 15-year career, I’ve never seen anything like this before. I can’t wait to share it with you as soon as I’ve finished back testing the strategy.