Buckle Up, We’re About to Find Out if the Fed Failed

Forget stocks hitting new highs, forget the trade war, forget everything the financial media is telling you to focus on…

The single most important development in the investment universe is the fact that in 2018, the Everything Bubble has burst.

The “Everything Bubble” is the term I coined for the bubble in U.S. government bonds, which are also called treasuries.

That’s because this time around the Fed created a bubble in the bonds that serve as the bedrock of our current financial system. The yields on these bonds represent the “risk free” rate of return. In other words, it’s the rate against which all risk assets (stocks, commodities, real estate, etc.) are priced.

Put another way, every asset class adjusted to extraordinarily low bond yields that were based on Fed monetary interventions.

Seeing this, I published my bestselling book The Everything Bubble: the Endgame For Central Bank Policy in late-2017 to warn what was coming. My warning was that the Everything Bubble would soon burst, and when it did, the Fed would be forced to engage in even more extreme monetary policy.

Then six months later, the Everything Bubble burst, with the yield on the 10-Year Treasury breaking out of its long-term downtrend which you can see in the chart below. 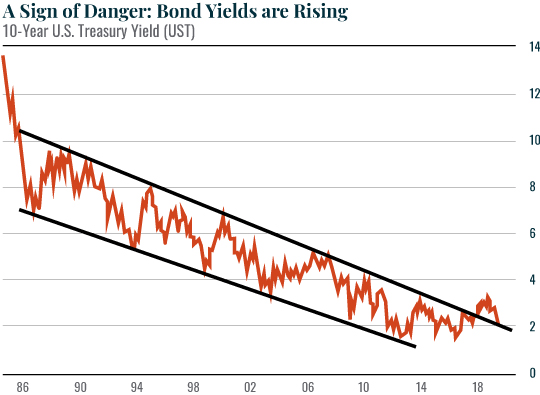 The 10-Year Treasury is the single most important treasury bond because the typical economic cycle (both expansion and contraction) lasts about 10 years.

The breakout in this bond’s yield is was what caused the Fed to panic in 2018, and start talking about cutting interest rates, new Quantitative Easing (QE) programs and more.

Put simply, the Fed was DESPERATE to get treasury yields to roll over and fall back into their historic downtrend.

It’s now “do or die” time for this desperate gambit.

The chart below is a close-up of the recent activity in the 10-Year Treasury Yield. As you can see, the yield has fallen right to its former trend line. 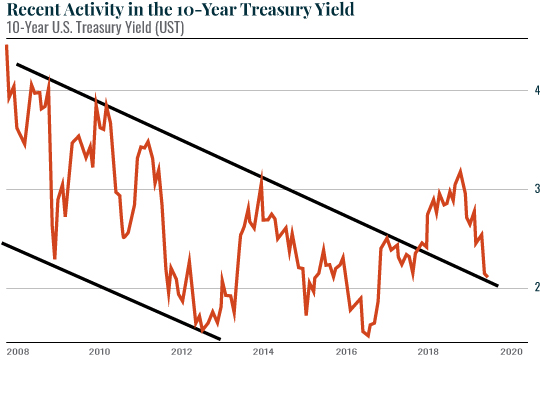 What happens here is a big deal.

If the yield breaks below that red line, it will re-enter its historic downtrend, and the Fed’s effort to “patch over” the bursting of the Everything Bubble will have worked…

If the yield DOESN’T break below that red line, but turns back up — the Fed’s strategy will have FAILED.

And that’s when the Fed will be forced to introduce EXTREME monetary policies.

This will mean aggressively cutting interest rates, eventually down into NEGATIVE territory.

It will also mean introducing MASSIVE QE programs to the tune of $100-200 billion per month.

Put simply, EVERYTHING hinges on what the 10-Year Treasury Yield does here.

And those investors who embrace the right strategies going forward could potentially generate literal fortunes.

On that note, I’ve spent the last six months developing a proprietary trading strategy to profit from the bursting of the Everything Bubble.

The whole point of this system is to produce MASSIVE gains FAST as the bursting of the Everything Bubble forces the financial system to gyrate this and that way.

I’ll tell you all about it in the coming weeks, but the initial results are some of the best I’ve ever seen in my 15-year career. The last two trades were up 100% and 60% respectively — and we held both for less than a week!