On Monday, I noted that the U.S. dollar had yet to confirm the Fed was about to ease monetary conditions.

The idea here is simple: The currency market is the largest, most liquid market in the world. It trades over $5 trillion — yes, with a “T” — per day. (By way of contrast, stocks only trade about $80 billion per day).

Because of this, the currency markets are far more sensitive to changes in the financial system/global economy than stocks. So it often pays to watch what’s happening in currencies.

With that in mind, on Monday I also noted that the U.S. dollar was weakening, but had yet to break critical support (as shown by black line below). 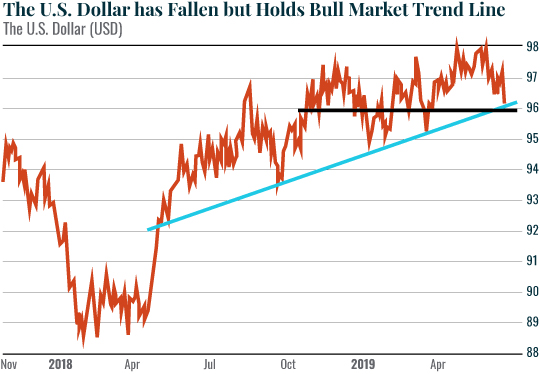 That has since changed…

As of yesterday, the U.S. dollar has broken both its bull market trend line (you can see this with the blue line in the chart below) AND critical support (shown by the black line). 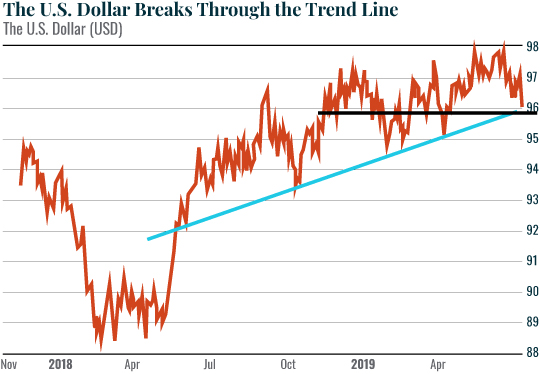 Regarding #1, the markets are now telling us that the Fed will be forced to cut rates soon… and possibly by quite a lot.

The U.S. Dollar’s Impact on the Stock Market

First and foremost, a weak-U.S. dollar environment is one that favors a higher rate of inflation.

In this environment, precious metals, precious metals miners, and emerging markets all perform well. The exception to this is China, which will suffer as a result of the trade war with the U.S.

Secondly, a weak-U.S. dollar environment can be beneficial for stocks… but only if the economy holds up.

If the U.S. dollar is weakening based on the Fed easing policy to try and stop a recession, then things can get QUITE ugly for the stock market. You can see this in the chart below. 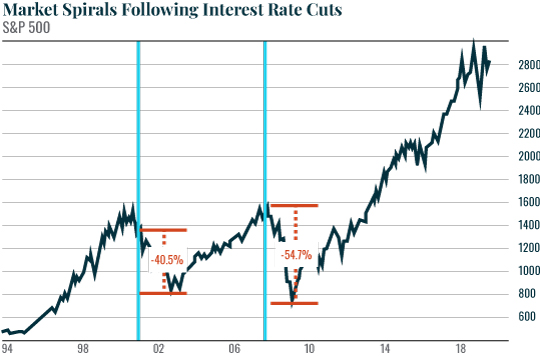 So while the U.S. dollar’s recent weakness has clarified what’s to come in the near-term, we can’t lose our focus on the stock market… because if the Fed’s easing isn’t enough to hold up the economy, we could see a crisis just like the one we saw in 2000 and 2008.

Bottom line: Those investors who embrace the right strategies going forward could potentially generate literal fortunes, depending on how this plays out.

On that note, I’ve spent the last six months developing a proprietary trading strategy to trade the Fed, and other central banks’ monetary policies.

The whole point of this system is to produce MASSIVE gains FAST, as the financial system tends to gyrate this and that way based on what central banks are doing.

I’ll tell you all about it in the coming weeks, but the initial results are some of the best I’ve ever seen in my 15-year career. The last two trades were up 100% and 60% respectively — and we held both for less than a week!