Is the Fed Part of the “Deep State” Coup Against the President?

I need to let you in on a secret…

Over the last few months I’ve had this nagging feeling.

I get this feeling very rarely… and only when my intuition starts to pick up on something BIG.

However, I didn’t want to actually write about this topic because if my suspicions were proved correct, it would be almost too horrible to imagine.

However, after a former Fed insider made a truly startling admission last week, I no longer had any choice but to come clean on my theory…

I am increasingly concerned that the U.S. central bank, the Federal Reserve (the Fed for short) is part of the “Deep State” coup against President Trump.

Before you label me a conspiracy theorist, consider that former vice chairman of the Fed, Stanley Fischer strongly hinted this is the case last week.

Fischer is one the most connected former Fed officials on the planet. And during a private talk in Israel, he stated that the Fed might not have raised rates last December if President Trump had not been so critical of the Central Bank’s policies. 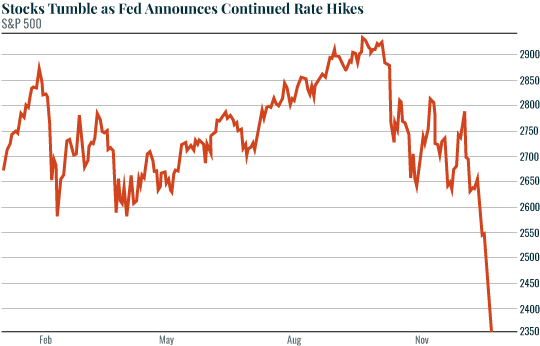 Why would the Fed do this?

It’s one thing to dislike a President… but it’s something else entirely to intentionally hurt the stock market and the economy in order to make a political statement.

And that’s what got me thinking…

What if the Fed is TRYING to hurt the economy in order to hurt the President politically?

It sounds insane on the surface, but consider the following…

During the eight years of the Obama administration’s two terms in office from 2008-2016, the Fed hiked rates only TWICE. And for seven of those eight years, the Fed kept interest rates at ZERO.

On top of this, between 2008 and 2016, the Fed printed $3 TRILLION in new money and used it to prop up the economy and the stock market.

Then, Trump wins the election in November 2016 and the Fed hikes rates a whopping seven times in the span of TWO years. It also begins Quantitative Tightening (QT) where it DRAINS $50 billion from the financial system every single month.

Put simply, as soon as it was clear that Donald Trump would be the next President, the Fed embarked on its most aggressive monetary tightening schedule in history.

And there is no indication it plans on stopping.

Despite what the financial media is telling you, the Fed continues to drain $25 billion in liquidity from the financial system every single month.

And despite the President openly calling for the Fed to ease conditions AND the clear signals from the data that the U.S. economy is weakening — the Fed has REFUSED to cut interest rates even once.

Indeed, just yesterday Fed Chair, Jerome Powell, refused to guarantee a rate cut in July, even while admitting he has “concerns about the strength of the global economy.”

Is the Fed attempting to sabotage the economy and stock market in order to hurt the President?

This is the #1 issue for the markets right now. Stocks can overcome a weak economy and even a trade war — provided the Fed is ready to act — but if the Fed isn’t interested in supporting either due to its political views, then we better watch out.

With the markets near an all-time high, and the Fed already hinting that it hates the President, now is not a good time to put capital to work in the markets. Instead, I’d suggest raising cash and adopting a “watch and wait” mentality concerning the Fed’s actions going forward.

If you’re looking to gain insight into what’s going on in the global financial system, you NEED to look at the currency markets.