In the last few issues of Money & Crisis, I’ve laid out clear evidence that the Fed is part of the deep state’s attempt to sabotage the Trump administration.

When you consider these differences in the context of the U.S. economy under both presidents — it becomes clear that the Fed was doing everything in its power to stop the economy from accelerating during the Trump presidency.

You can see this in the chart below, where the Fed inundated his first-term with multiple rate hikes… 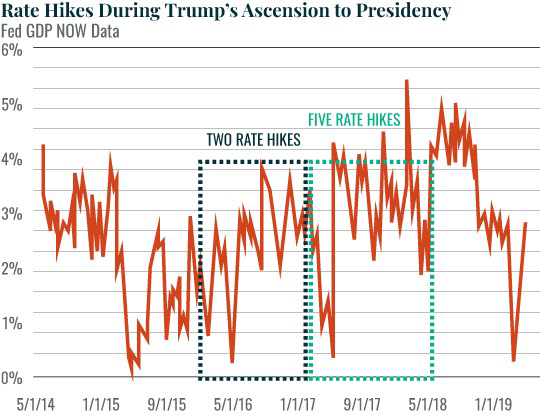 The Fed will unveil its next monetary policy move on July 31, 2019.

Put another way, the markets think there is a 0% chance the Fed will NOT cut rates at its July meeting.

Meanwhile, Fed officials are indicating it is highly probable they WON’T cut rates at all.

“The question my colleagues and I are grappling with is whether these uncertainties will continue to weigh on the outlook and thus call for additional policy accommodation.”

Put simply, Powell is in “watch and wait mode” when it comes to the possibility of cutting rates. This hardly sounds like the words of someone who expects a rate cut in four weeks’ time

On Thursday, San Francisco Fed President Mary Daly said she too is not sure the Fed should cut rates in July, stating:

“It is too early to know if we should use the tool [interest rates] at all.

And finally on Friday, Dallas Fed President Robert Kaplan said he too doesn’t think the Fed should cut rates, saying:

“I want to take a little more time to see how events unfold.”

Why does this matter?

Because, as I noted a few moments ago, the stock market believes with 100% certainty that a rate cut is coming in some form.

So if the Fed chooses to NOT cut rates at all — we can expect the stock market to collapse.

Indeed, judging from bond yields, this is precisely what will happen.

Bond yields are much more closely aligned with actual Fed policy than stocks, which typically trade based on hype and hope.

With that in mind, I want to point out that bond yields are telling us that there will be NO rate cuts in July… and that stocks could easily collapse 17% based on this. 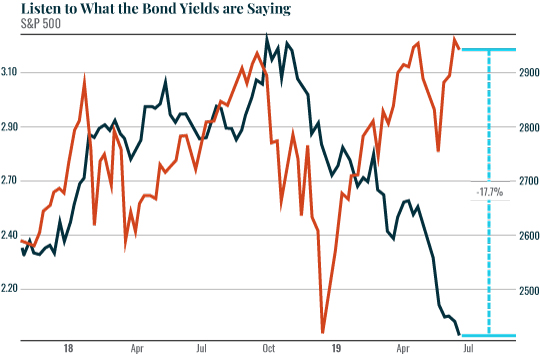 We already know the Fed was willing to RAISE rates to hurt the stock market out of spite for the President back in December 2018.

Will the Fed now refuse to CUT rates in July for a similar reason?

Judging from what Fed officials are saying, this could very well be the case. And with stocks already overstretched and near all-time highs, this has the makings of a MAJOR upset.

Tomorrow, I’ll tell you about a unique investment you could use to profit from what the Fed is planning.

I wouldn’t want to bet against President Trump in the long-term, but as a short-term trade, we could see major gains if the Fed tries to “pull the rug out from under” the stock market.