Over the last week or so, I’ve detailed that the Fed is part of the Deep State’s coup against President Trump – specifically how the Fed has used aggressive monetary policies to damage the economy and stock market for political purposes.

Thus far we’ve focused on the Fed’s side of this war. Today we’re going to look at President Trump’s “plan of attack.”

First and foremost, it is now clear that President Trump is aware of the Fed’s plot…

Preparing to Enter the Ring

Over the last month, the President has repeatedly taken the Fed to task, pointing out that if the Fed had not acted so aggressively, both the U.S. economy and the U.S. stock market would be in much better shape. 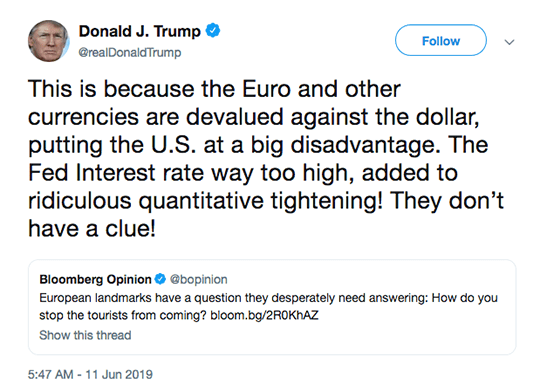 This verbal attack on the Fed was just the beginning. One week later, the White House floated the idea of demoting Fed Chair Jerome Powell to the media…

The strategy was clear. This was a “trial balloon” to see how the media and the public would respond to Powell being demoted.

It was also a warning shot to the Fed that the President was onto its scheme, and that he would not hesitate to take legal action if needed.

And that’s when it became clear that the President was using a “one-two punch” strategy against the Fed.

Trump’s “One-Two Punch” Against the Fed

The phrase “one-two punch” refers to a boxing combination.

One: A jab. This is a setup punch used to distract your opponent so he or she cannot see what’s coming.

Two: The cross. This is the knockout punch that is delivered immediately after the jab while your opponent is distracted.

In the case of President Trump’s strategy against the Fed, the “jab” consists of repeatedly emphasizing that the Fed’s monetary policies hurt the economy and the stock market.

We see this repeatedly both in the President’s tweets and his media appearances. 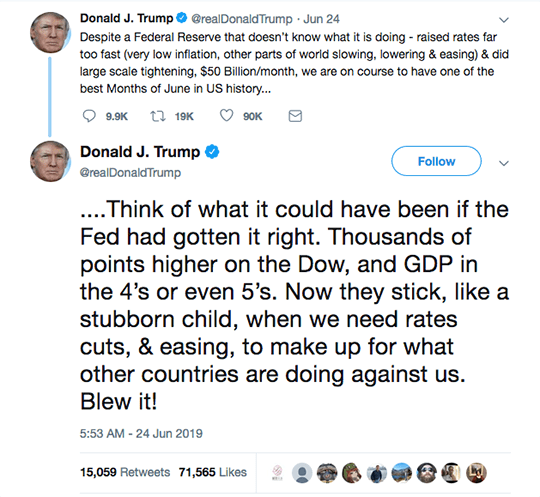 In this scenario, the “knockout punch” would be the actual demotion of Chair Jerome Powell…

And what a knockout it would be.

No President has ever tried to fire or demote a Fed Chair. Imagine the impact such a move would have on the Fed. This would send a clear message:

The Fed is NOT untouchable. Deliver on Trump’s demands or you’re gone.

And this is not a bluff… It is now clear to me that the President and his proxies are building the case for demoting Jerome Powell as we head into the Fed’s July meeting.

Since originally floating the idea on June 18, the President has repeatedly reaffirmed that he has “the right” to demote Jerome Powell from Fed chair if he so chooses.

Yes, the demoting of a Fed Chair would be a tricky legal situation… but even if he merely attempts to do it, the President will have obtained his desired result.

That result? End the Fed’s coup and get the Fed to start easing at the same time.

Put simply, if the Fed fails to lower rates at the end of July, I fully believe Trump is going to deliver a knockout punch by attempting to demote Jerome Powell.

Until then, he’ll keep jabbing at the Fed, pointing out how its monetary policies hurt the economy and the stock market.

In this environment of Central Bank intrigue, there is the opportunity to produce literal fortunes with the right trading strategy.

I’m now preparing for an even more aggressive strategy to profit from the next round of central bank policies.