Trump’s Master Plan to Take Over the Fed

On Wednesday, I detailed President Trump’s “one-two punch” knockout strategy for the Fed.

The background here is simple. It is now clear the Fed is part of a Deep State coup against President Trump.

The Deep State tried to bring down the President by rigging the 2016 Presidential election with vote recounts and Electoral College schemes.

When that failed, they tried to bring him down via the Russia-gate scandal – a manufactured scandal funded by the Democrats to void the election by claiming the President colluded with Russia in order to win.

Then when that failed, the Deep State turned to the Fed.

A group of unelected bureaucrats – many of them with political allegiances to President Trump’s enemies and at least one of whom donated funds to the Clinton campaign in 2016 – implemented the most aggressive monetary policies in history. All in order to sabotage the U.S. economy and the U.S. stock market.

The President caught onto this scheme in late 2018. Soon thereafter, he summoned the Fed’s No. 1 and No. 2 to a private dinner at the White House…

Since that time, he has begun a “one-two punch” knockout strategy against the Fed. We’ll quickly review that strategy now.

Trump’s “One-Two Punch” Against the Fed

The phrase “one-two punch” refers to a boxing combination.

One: A jab. This is a setup punch used to distract your opponent so he or she cannot see what’s coming.

Two: The cross. This is the knockout punch that is delivered immediately after the jab while your opponent is distracted.

In the case of President Trump’s strategy against the Fed, the “jab” consists of repeatedly emphasizing that the Fed’s monetary policies hurt the economy and the stock market.

We see this repeatedly both in the President’s tweets and his media appearances.

By way of contrast, the “knockout punch” is the threat of demoting Chair Jerome Powell. Both the President and his advisors have been floating this to the media as something they will implement if the Fed doesn’t start easing monetary policy soon.

Or rather, this seemed to be Trump’s “knockout punch”…

But is it really?

True, threatening to demote a Fed Chair would qualify as a “knockout” for anyone else…

But we are talking about Donald Trump here. A man for whom revenge is a “way of life”… 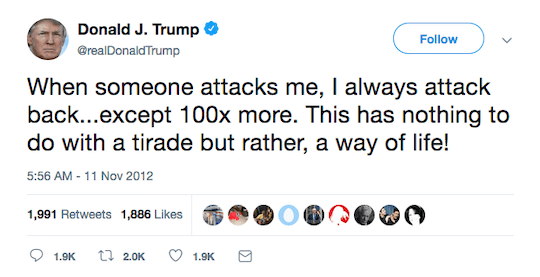 Knowing this about the President, I figured that he had something WAY more severe in mind than merely demoting the current Fed Chair when he decided to exact revenge on the Fed.

Buckle up. Because on Sunday of this week, the President revealed his Master Plan for the Fed via one of his proxies…

Trump’s Plan is more Deadly than We Thought…

Art Laffer is one of the President’s closest economic advisors.

Laffer advised candidate Trump during his 2016 Presidential campaign, and was one of the guiding forces behind the President’s 2017 Tax Reform bill. For this and other reasons, the President recently awarded Laffer the Presidential Medal of Freedom, the highest honor a civilian can receive.

And on Sunday of last week, Laffer revealed just what the President is thinking about doing to the Fed.

Read the following quote closely and prepare to be astonished…

“The Fed shouldn’t be independent of the administration. Never should be. None of those people were elected. They were appointed. And there’s no reason for them being appointed. It’s a policy tool that should be in the hands of the Congress and the President to make our country better...

“Not in the hands of some Princeton professors who never worked a day in their lives except on an academic paper that’s far from reality. I don’t think there should be an independent Fed.”

–Art Laffer via a radio interview in New York. [Emphasis my own.]

The implications here are clear. The President isn’t thinking about demoting Fed officials… he’s going to FIRE ALL OF THEM and bring the Fed under the control of Congress and the President.

If we were talking about anyone else, this idea would be ludicrous. But again, we’re talking about Donald Trump – a man who beat the two most powerful political dynasties in the U.S. (the Bushes and the Clintons) as a political outsider and with half the budget and a quarter of the staff, during an election in which 93% of the media endorsed his opponent.

Anyone who could accomplish that stands a reasonable chance of taking on the Fed.

I fully expect to see President Trump move to reform the Fed going into the 2020 Presidential election. The process might not be complete until we’re into the President’s second term, but the Fed’s days are numbered.

In this environment of Central Bank intrigue and political sabotage, there is the opportunity to produce literal fortunes with the right trading strategy.

I’m now preparing for an even more aggressive strategy to profit from the next round of central bank policies. In the last month alone, we’ve seen gains of 67% in two days’ time, 75% in five days’ time, even 100% in four days’ time.

The door is now open to MASSIVE returns for traders. Allow me to explain…