Last week, we changed the focus of our analysis from the Fed’s plan to derail the Trump Presidency by intentionally sabotaging the economy and stock market, to President Trump’s master plan to stop the coup attempt dead in its tracks.

As a businessman, Donald Trump repeatedly asserted that he is a “counter puncher” who waits for his opponents to attack him – and then he hits back 100X as hard.

For Donald Trump, this is “a way of life.” 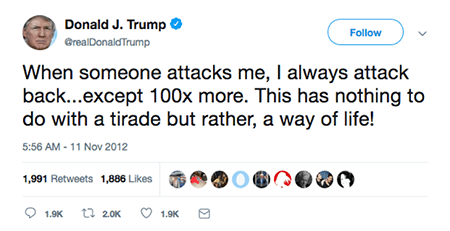 Which is why I believe the President is planning something MASSIVE for his enemies at the Fed.

There are already hints of it…

President Trump is Already Planting the Seeds for Fed Takeover

This time last week, one of the President’s closest economic advisors stated the following during a radio interview.

“The Fed shouldn’t be independent of the administration. Never should be. None of those people were elected. They were appointed. And there’s no reason for them being appointed. It’s a policy tool that should be in the hands of the Congress and the President to make our country better...

“Not in the hands of some Princeton professors who never worked a day in their lives except on an academic paper that’s far from reality. I don’t think there should be an independent Fed.”

–Art Laffer via a radio interview in New York. [Emphasis my own.]

The implications here are clear. The President isn’t thinking about demoting Fed officials… he’s going to FIRE ALL OF THEM and bring the Fed under the control of Congress and the President.

I realize that is a truly astonishing claim.

Never before in history has a President attempted such a thing.

Former President Richard Nixon threatened to do it in 1971… but ended up simply breaking the Gold Standard (the link between the U.S. dollar and gold) instead.

As I have stated before, President Trump never threatens to do something he hasn’t already researched and knows is 100% possible.

Which raises the question: What angle would the President take to end the Fed’s independence/absorb the Fed into the U.S. government?

It’s not as though he could simply do it based on legal claims. The President’s enemies in the media, Congress, and the Deep State would raise such a stink about “overreach” or Trump “becoming a dictator” that this would never fly.

No. President Trump would need a unifying issue… something so dramatic that the majority of Americans would be willing to “sign off” on his move to take over the Fed.

Preparing to Enter “the Currency Wars”

I believe President Trump will soon declare control of the U.S. dollar as a matter of national security.

The national security risk? That other nations are manipulating their currencies to hurt the U.S. economy.

Put simply, the President is preparing to enter “the currency wars.” And he’s going to do it by absorbing the Fed into Congress/the Executive Branch.

The President has already been laying the groundwork for this for months, pointing out the stark differences between the U.S. Central Bank and China’s, particularly in terms of how monetary policy can be used as a weapon against other countries.

In early May, the President tweeted the following about the U.S.-China trade war: 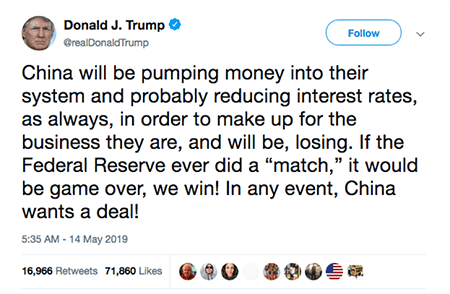 Then, in early June the President complained about the difference between how Chinese and the U.S central banks operate:

“The head of the Fed in China is President Xi. He can do whatever he wants. They devalue. They loosen monetary policy to help offset the burden of tariffs, he said. The People’s Bank of China lacks the political independence of counterparts like the Fed, meaning Chinese President Xi Jinping and his colleagues must approve major PBOC decisions.”

–President Trump to CNBC. [Emphasis my own.]

President Trump is implicitly stating, “China has the advantage in terms of how it runs its Central Bank.”

Now take a look at the tweet below. The President has continued developing this theme: 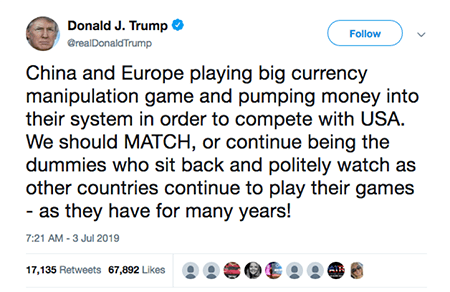 In short, Trump is saying that other nations are manipulating their currencies to hurt the U.S. economy/trade. And according to Trump, the U.S. needs to “match” their efforts or it will “lose” the trade wars.

The only thing standing in the way of this is a handful of unelected bureaucrats at the Fed who “don’t know what they are doing.”

Here’s even more proof of Trump’s very public case against the Fed: 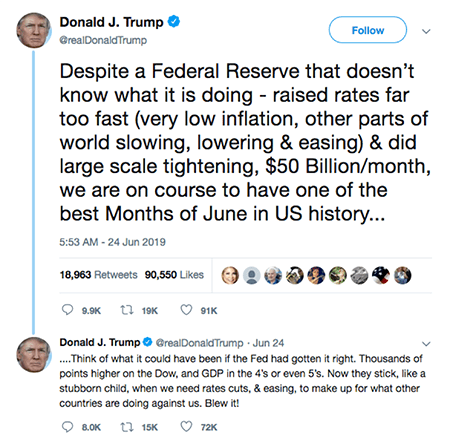 Put simply, the President is repeatedly building the case for a Fed takeover on a near weekly basis. He’s going to claim it’s a matter of national security due to other nations manipulating their currencies to hurt the U.S.

I’m now preparing for an even more aggressive strategy to profit from the next round of central bank policies. In the last month alone, we’ve seen gains of 67% in two days’ time, 75% in five days’ time, even 100% in four days’ time.