Over the last week, I’ve detailed how President Trump intends to take over the Fed.

In its simplest rendering, the President and his proxies have begun lambasting the Fed in the media and on Twitter for its monetary policy mistakes.

In particular, the President has emphasized that the Fed has hurt both the U.S. economy and stock market with monetary policies that were too aggressive.

It’s critical to note that as part of their attack, the President and his proxies have emphasized how different the Fed’s policies were from those of other central banks. The President has pointed out how other countries are “taking advantage” of the U.S. by manipulating their currencies.

The below tweet from last Friday is a great example of this: 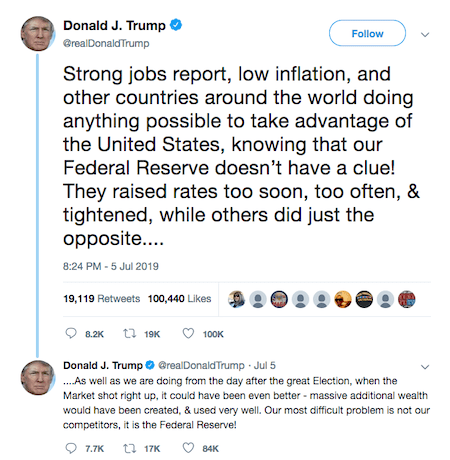 This is the crux of what President Trump is planning. He has to make monetary policy a matter of national security based on other countries hurting the U.S. by devaluing their currencies.

If he can successfully do this, the President can make a case that the Fed should be dissolved and the printing of the U.S. dollar should be controlled by the President and Congress.

Why is the President pushing for this now?

Because he realizes that World War III is about to start. And this time, the weapons won’t be bullets or bombs.

They’ll be currencies and debt.

Globally, the world is completely saturated with debt.

With this much debt outstanding, countries have only two means of remaining solvent:

Option No. 1 would mean a debt crisis for any country that chooses it. That is political suicide for any politician.

This means that globally, countries and their respective central banks will opt for option No. 2. In this scenario, the country’s central bank begins printing its currency – thereby devaluing the currency – so that future debt payments “cost” less.

Think of it this way. If you owe $1 billion, and the dollar loses 20% of its value during the time it takes for you to pay back the debt, you technically only owe $800 million in today’s dollars.

This is THE game for every major central bank in the world today.

The European Central Bank (ECB) ended its last monetary easing program in December 2018. Less than 60 days later, the ECB had already begun its next easing program.

Put another way, the longest the ECB could go without easing/devaluing the euro was less than two months. Bear in mind, this comes after a FULL decade of monetary easing.

As ridiculous as this is, the ECB is actually one of the more aggressive central banks.

Japan’s central bank (called the Bank of Japan or BoJ) didn’t even pretend that it would be able to end its monetary easing. The last time the BoJ tightened monetary policy was in 2007 – over 12 years ago!

THIS is why President Trump will move to dissolve the Fed and take over the printing of the U.S. dollar. He knows that unless the U.S. enters the currency wars, it’s at a massive disadvantage. 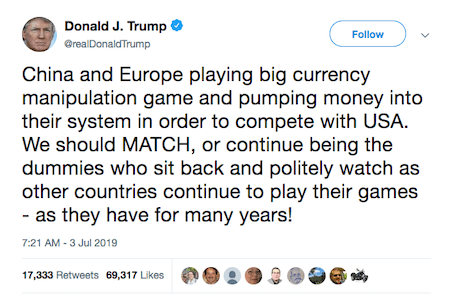 Let me be clear here. The world is about to enter a period of unprecedented central bank interventions.

While it’s nice to see stocks rallying so much, we need to consider what might be coming down the pike in the near future. Bonds suggest it’s nothing pretty.