Yesterday, I outlined how the stock market seems to believe that President Trump has won this round, with stocks hitting new all-time highs based on the belief that the Fed is about to ease monetary policy aggressively.

On that note, the market is predicting the Fed will cut rates by at least 1.0% this year. Whether it be by four 0.25% rate cuts or one 0.5% rate cut and two 0.25% rate cuts, the stock market believes the Fed is going to deliver in a BIG WAY.

Treasury Market: There’s a Surprise in Store for Stocks

The Treasury market is warning that the Fed isn’t going to do this.

In fact, Treasury yields have begun to rally again just as they did before the Fed disappointed the markets in April, leading to a stock market sell-off in May. 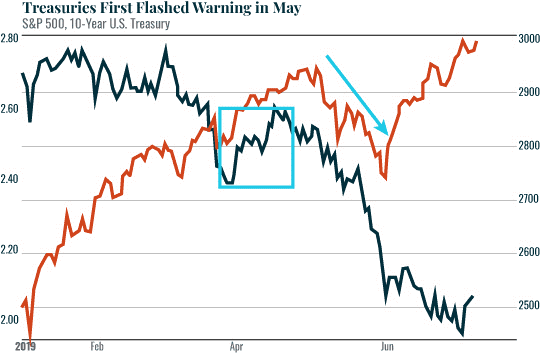 Unfortunately, based on recent statements from Fed officials it looks like Treasuries will be proven right here.

On Wednesday and Thursday of this week, Fed Chair Jerome Powell appeared before Congress. During his testimony he suggested that the Fed might cut rates, but not nearly as aggressively as the market believes.

If anything, Powell sounded uncertain about what the Fed would do. Heck, he used the word “uncertain” over 20 times during his appearance: about the economy, the labor market, Brexit and the Fed’s policy response.

Put simply, Powell’s testimony didn’t show him to be ready to ease. If anything, it showed him to be concerned about the economy – but not enough to warrant an aggressive easing schedule.

And Powell is not alone in this…

There are 10 Fed members on the Federal Open Market Committee (FOMC), the group in charge of deciding the Fed’s interest rate policy.

Plus, another seven non-voting Fed officials attend these meetings and help make up the Fed’s interest rate forecast (this is commonly referred to as the Fed’s “dot plot”).

So all told, there are a total of 17 Fed officials predicting where rates will be by year-end.

NONE of them are predicting FOUR rates cuts.

Heck, none of them are predicting THREE rate cuts either.

Only SEVEN expect there to be two rate cuts this year.

The rest expect either just one rate cut (nine members) or one rate HIKE (one member) this year.

Put another away, there is NO sign anywhere from the individuals in charge of Fed policy that the Fed is about to ease aggressively.

At best, you could make a case that they plan on two rate cuts – roughly HALF of what the stock market believes is going to happen.

No wonder President Trump continues to berate the Fed…

This round is not over by any stretch. And judging by recent Fed statements, there isn’t even a guarantee the Fed will cut rates at its July meeting in a few weeks.

The stage is set for a potentially BIG surprise here.