Thus far, it has looked as though President Trump has won this round of the war – the Fed appears ready to actually cut rates. At least, the Fed is indicating that it’s considering such a move.

However, I just uncovered a smoking gun…

One that, if correct, reveals that the Fed has something truly sinister planned for the President…

I’m talking about a stock market crash triggered by the Treasury market.

To understand this signal, you first need to know how the Treasury market works.

How to Spot a Well-Behaving Bond Market

When we talk about the Treasury market, we’re actually talking about Treasury bonds that are issued for different time periods ― ranging from four weeks to 30 years.

Of these various bonds, two are considered the most important for examining major changes in riskiness for the financial system: the Two-Year Treasury and the 10-Year Treasury.

These two Treasuries are most important for a simple reason.

Two years represents the near term prospects for the economy… 10 years typically encompasses an entire economic cycle (both growth and contraction).

Together, the yields on these two Treasuries are called a yield curve.

It’s called a “curve” because under normal conditions, bond investors demand that a Treasury bond pay them a greater yield for lending their money to the U.S. for a longer time period.

Of course, when things are operating as normal we don’t need to worry.

It’s when the bond markets enter a period of abnormal conditions ― called a yield curve inversion ― that we need to pay attention.

A Misbehaving Bond Market Can Cause Serious Problems

As a standalone item, this isn’t a huge deal. It’s when the yield curve inverts and stays inverted for a prolonged period that the financial system gets into MAJOR trouble.

See for yourself. The last two times the yield curve broke above its 21-month moving average and stayed there were in 2000 and 2007 (marked on the lower half of the chart).

Both times marked the beginning of the end for the stock market, with a MAJOR crash coming soon after (marked on the top half). 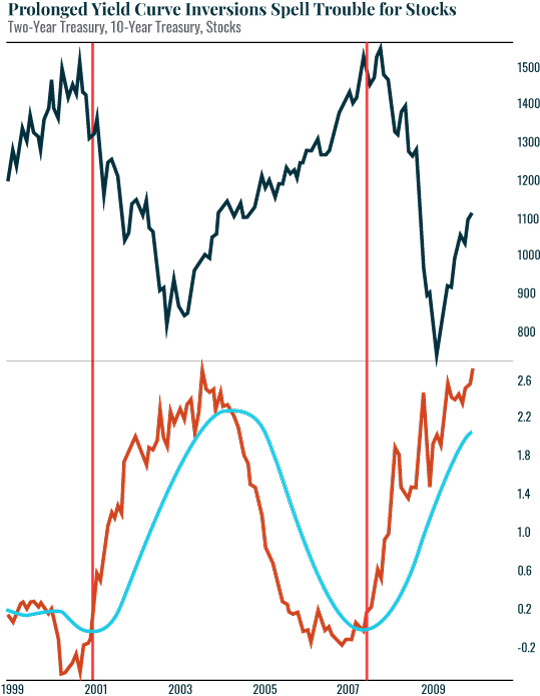 Now let’s take a look at where the yield curve is relative to its 21-month moving average today.

The Yield Curve Flashes a Major Warning for Stocks 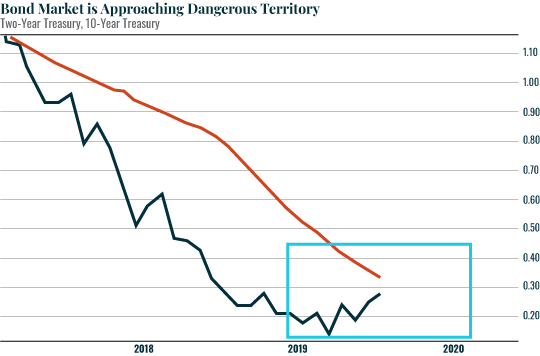 As you can see, the yield curve has inverted, and is now rapidly approaching its 21-month moving average. If it breaks above that line and stays there, stocks WILL CRASH.

At its current pace, this would happen sometime in early 2020 – right as President Trump begins to aggressively campaign for his re-election later that year.

You can imagine the impact this would have… A stock market crash right as President Trump is talking about his track record of success with the economy and the stock market.

Meaning, the President better watch out!