Yesterday’s article caused quite a stir!

If you missed it, I discussed the Deep State attempting an act of economic terrorism against the U.S.

To get the U.S. to default on its debt, thereby crashing the financial system on President Trump’s watch.

I realize this sounds crazy, but consider the following…

Put another way, the U.S. has roughly one week to resolve this issue – or the U.S. could end up defaulting on its debt.

And now, the U.S. Treasury market is aware of this…

U.S. Treasuries are Beginning to Feel the Effects

The long end of the Treasury market is comprised of Treasuries that come due in 20 years or more.

These are the bonds that are most likely to be dumped if investors begin to fear a U.S. default. After all, why would you lend money to the U.S. for 20-plus years when it’s in danger of not paying you back?

With that in mind, take a look at the chart below.

The Long Treasury Fund (TLT) has rolled over and is falling to test support (gray line). If it can’t hold here, it will soon test its bull market trend line (blue line).

And if it can’t hold that… the U.S. could soon be in real trouble. 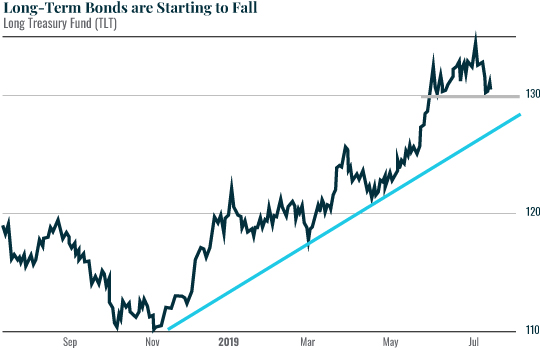 Even short-term Treasuries (Treasuries that come due in one-three years) are showing the exact same chart formation!

See for yourself below.

The 1-3 Year Treasury Fund (SHY) has ALSO rolled over and is falling to test support (gray line). If it can’t hold here, it will soon test its bull market trend line (blue line).

If it falls below that… well it’s not pretty. 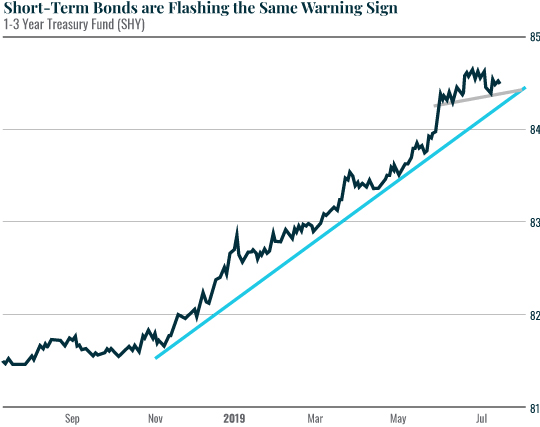 I’m watching these bond funds closely. And I do expect President Trump and the Treasury Department to find some means of navigating this potential crisis.

But as an investor, I’m always looking for unexpected events that could open the door to extraordinary gains.

This current U.S. Debt Ceiling situation has all the makings of such an event.