We need to talk about Deutsche Bank (DB).

DB shares have been going straight down for the better part of a decade. As I write this, they recently hit new all-time lows below $7 per share. 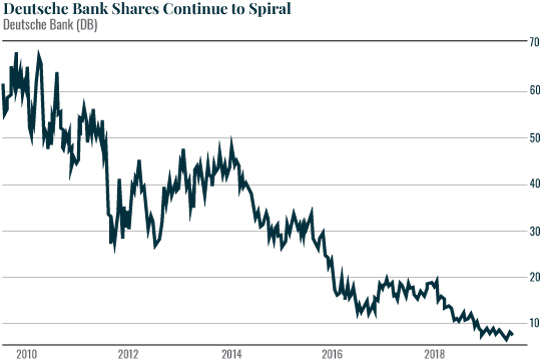 What is a Derivative?

Investopedia defines a derivative as:

A derivative is a contract between two or more parties whose value is based on an agreed-upon underlying financial asset, index or security. Common underlying instruments include: bonds, commodities, currencies, interest rates, market indexes and stocks.

In simple terms, a derivative is essentially a bet between two parties about the future price or value of a particular asset.

For instance, if a cattle farmer was concerned about the future price he’d get for a herd of cattle when it comes time to slaughter them, he could hedge his risk by buying a derivative that gave him the right to sell his cattle at a particular price, no matter what the market is paying for cattle at slaughter time.

Now there are two types of derivatives:

Deutsche Bank is one of the largest owners of OTC derivatives on the planet. All told, the bank owns $48 TRILLION (with a “T”) worth of these things.

To put this into perspective, that’s 13 TIMES greater than the GDP of Germany, the country in which Deutsche Bank is based.

That means there is considerable risk involved with DB’s derivatives.

I realize this is difficult to follow, so think of it this way: At their peak, the specific derivatives that triggered the 2008 meltdown were roughly 400% of U.S. GDP at the time.

And DB is slowly careening towards bankruptcy. The bank just laid off 18,000 employees and is attempting to restructure its bad debt into a separate entity.

But don’t let this fool you. Any restructuring plan that doesn’t involve DB’s derivatives book is just idle posturing.

Small wonder then that the European Central Bank (ECB) is frantically attempting to introduce new monetary easing programs. They know that if DB goes bust, Europe’s banking system will implode!

It Appears President Trump Won This Round… Or Has He?

Today I’d like to take a step back and take a look at what the markets are telling us about how the Trump-Fed feud is playing out.