For most people, debt is a polarizing topic.

To some, it’s a four-letter word, akin to an expletive…

For instance, I know people who have been talking about the U.S. “debt problem” as if it were a catastrophic issue since the early ‘80s.

To other people, debt is a means to “leverage up” and acquire assets — a way to gain great wealth and power…

President Trump is a perfect example. He’s previously referred to himself as “the King of Debt” – and he means that as a good thing. Debt is what allowed him to become a multibillionaire and the largest developer in New York City.

Now, those are the two extremes, and there are a myriad of interpretations in between.

But here’s one universal truth about debt: It doesn’t matter… until it does.

That is, anyone – a person, corporation, even a country – can rack up debt for years without consequence. And it only gets interesting when one of two things happens…

With that in mind, let’s talk about the U.S.’s debt situation…

The U.S. currently has over $22 trillion in debt.

This means our debt-to-GDP ratio (the ratio between our debt level and the total annual output of the U.S. economy) is an incredible 106%. This is not good.

And to make matters even more worrisome, the U.S. just almost hit its debt ceiling, the legal limit to how much debt the U.S. government can issue.

Congress controls this number via legislation. And as of last week, there were fewer than seven days for Congress to reach a deal with the U.S. Treasury to expand the amount to ensure the U.S. didn’t enter a technical default.

However, on Monday of this week, Congress and the U.S. Treasury came to an agreement, pushing back the debt ceiling issue for two years and opening the door to even GREATER discretionary spending by the U.S. government. 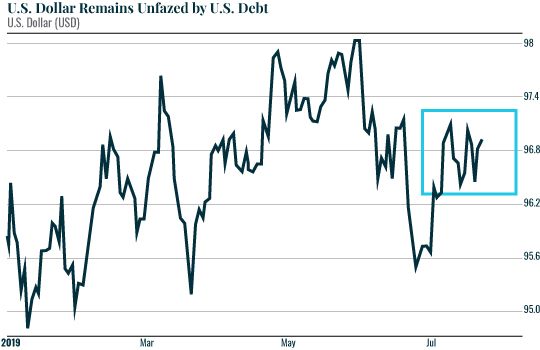 This is what makes this issue so complicated. It’s true the U.S. has too much debt. But until our currency begins to plunge dramatically, we’re in no danger of a debt crisis.

You can make a LOT of money by paying attention to the currency markets.

In fact, I’ve spent the last six months developing a trading strategy to do precisely this.

And we just closed out another winner – a 40% gain in just two days!

I’ll tell you all about it in the coming weeks, but suffice to say, the opportunity to generate literal fortunes from the currency markets is here.

It’s Official: The Coronavirus Has Burst the Everything Bubble

The Fed is now in very serious trouble.