The Everything Bubble is Under Extreme Pressure

Yesterday we discussed the U.S.’s debt situation from a currency perspective.

Specifically, we outlined that despite the fact the U.S. has a debt-to-GDP ratio of over 106%, it’s nowhere near a debt crisis.

We know this because the U.S. dollar continues to show strength. It’s only when a country’s currency begins to drop hard that a country with too much debt gets into serious trouble.

Today I’d like to take a closer look at what the U.S. Treasury is telling us via yields.

Bonds: The Bedrock of Our Current Financial System

As I outlined in my bestselling book The Everything Bubble: the Endgame For Central Bank Policy, U.S. Treasury bonds are the bedrock of our current financial system.

The yields on these bonds – particularly that of the 10-Year U.S. Treasury – represent the “risk-free” rate of return. Or, the rate against which all risk assets (stocks, commodities, mortgages, gold, you name it) are priced.

What happens when bond prices fall?

The financial system comes under duress because debtors are forced to pay higher interest payments on their debt.

This is because a typical economic cycle (both the boom and the bust) lasts about 10 years. As such, the 10-Year U.S. Treasury is perhaps the best barometer for the U.S. economy in the bond market.

That’s why it’s crucial that we pay extra attention to what this bond is doing.

With that in mind, let’s look at the single most important financial development of the last 35 years, shown on the chart below.

The chart tracks the YIELD on the 10-Year U.S. Treasury.

As you can see, in early 2018 the yield on the 10-Year U.S. Treasury broke out of its long-term downtrend.

This breakout signaled to the world that the 40-year bull market in bonds was ending… which is a MASSIVE deal. 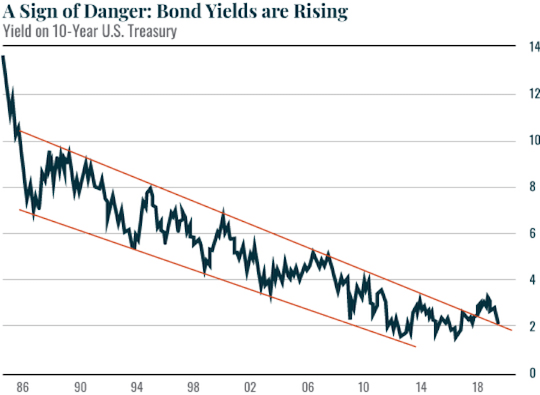 This is why the U.S. Central Bank (the Federal Reserve or “the Fed” for short) panicked late last year…

This is also why the Fed is currently talking about cutting interest rates – despite the U.S. economy growing at 3% and unemployment near record lows. The Fed is desperate to get the yield on the 10-Year Treasury back in its downtrend.

Thus far it’s working – but we’re not out of the woods yet.

Below is a close-up of the last part of the previous chart.

As you can see, the yield on the 10-Year U.S. Treasury hit its long-term trend line and has since bounced.

It is now moving in the WRONG direction again. 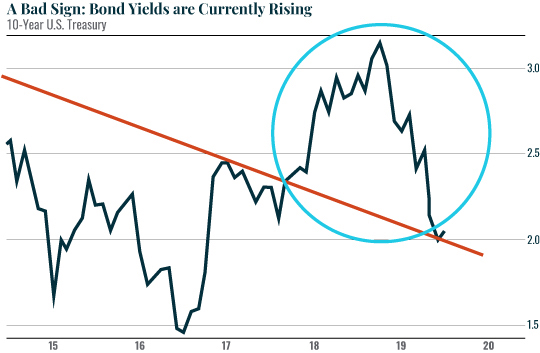 This is a MAJOR issue and one that the Fed needs to fix as soon as possible.

This is why the Fed’s meeting next week is such a big deal. Literally EVERYTHING is hinging on whether the Fed can get Treasury yields to continue to fall.

In fact, I’ve spent the last six months developing a trading strategy to do precisely this.

I’ll tell you all about it in the coming weeks, but suffice to say, the opportunity to generate literal fortunes from the currency markets is here.

I just uncovered a smoking gun… One that, if correct, reveals that the Fed has something truly sinister planned for the President…