Yesterday we discussed what the U.S. Treasury market is telling us via yields.

Specifically, we noted that bond yields are flashing danger once again, as the yield on the 10-Year U.S. Treasury has recently bounced off of its long-term trend line and is moving in the WRONG direction again.

This is shown on the chart below: 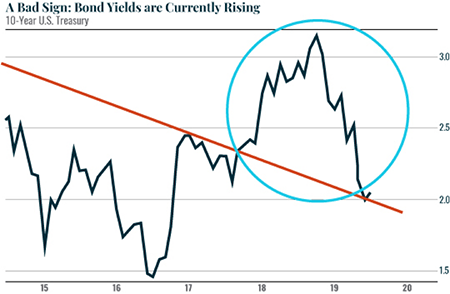 This is a MAJOR issue and one that the Fed needs to fix as soon as possible.

And when bond prices fall, the financial system comes under duress because debtors are forced to pay higher interest payments on their debt.

Thus far, the Fed has succeeded in getting Treasury yields to fall by promising to introduce more monetary easing. However, at some point the Fed will need to back up those promises with action.

In fact, this is precisely what just happened in Europe.

Europe Shows Us What’s Coming to the U.S. Soon…

Yesterday, the European Central Bank (ECB) announced that it will soon be cutting rates and introducing another Quantitative Easing (QE) program.

QE is the program through which a central bank prints new money and then uses it to buy debt from bank/financial institutions, in turn hoping to boost the financial system.

This is extremely significant because interest rates are already NEGATIVE in Europe. In fact, they’ve been negative since 2014!

Moreover, the ECB only just ended its last QE program in December 2018. And here we are just seven months later and it’s already talking about introducing a NEW even larger QE program.

The lesson here is that once a central bank introduces extraordinary monetary policies such as QE and ZERO or NEGATIVE interest rates, it becomes trapped.

The Fed is no different than the ECB. Thus far, our central bank has managed to avoid introducing rate cuts and more QE because the U.S. economy is more dynamic than Europe’s. But at some point, the Fed will be forced to start easing again.

And when it does, the big winner will be gold…

Below is a chart of gold priced in Euros.

As you can see, as soon as the ECB began seriously talking about introducing a new round of monetary easing, gold priced in Euros broke out of a multi-year consolidation pattern and erupted higher.

As I write this, gold priced in Euros is moving towards new all-time highs. 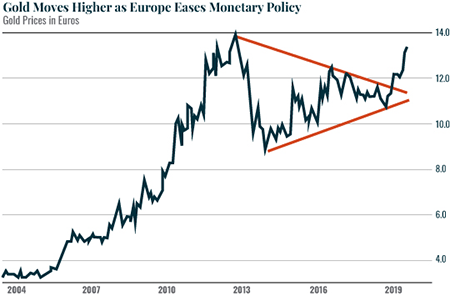 The message here is clear: When the next round of monetary easing hits, gold will be the big winner.