On Friday, we discussed what happens when the Fed follows the European Central Bank (ECB) in the next round of easing.

Specifically, we noted that the Fed is no different than the ECB in the way that at some point, it will be forced to start cutting rates and introducing new QE programs.

The reason for this is because the Fed is desperate to get Treasury yields back into their long-term downtrend. Recently, the yield on the 10-Year U.S. Treasury has bounced off of its long-term trend line and is moving in the WRONG direction again.

This is going to force the Fed to act and likely act soon. This can be seen in the chart below. 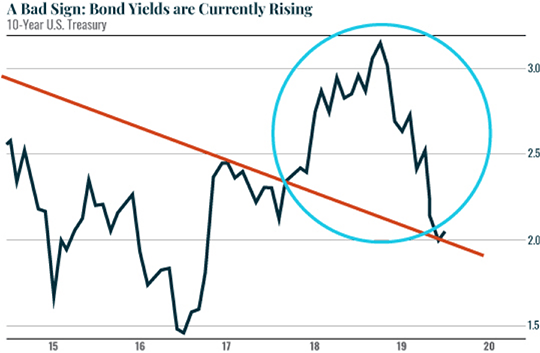 The big winner from this will be gold.

Gold Will Rise as Stocks Will Fall

When the ECB recently announced that it will soon be launching another round of monetary easing, gold — priced in euros — broke out of a multi-year consolidation pattern and erupted higher.

This is shown below. 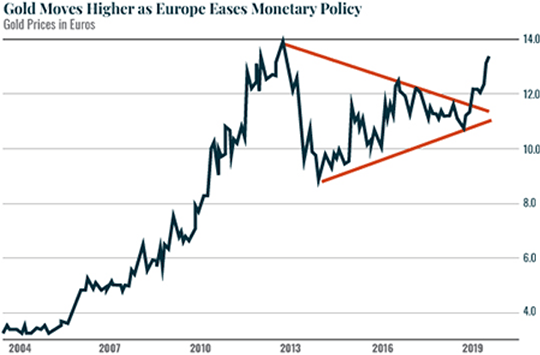 So, when the Fed follows the ECB, we can expect gold — priced in U.S. dollars — to follow. But what about stocks?

Stocks Will Also Rise… Before Falling

This is a bit more complicated. When the Fed implements its next round of monetary easing, it is going to unleash inflation.

We saw this in the early 1970’s right after then-President Richard Nixon took the U.S. off the Gold Standard. Stocks erupted higher as inflation rose from 1971-1973.

However, once inflation began to spiral out of control, the stock market plunged, giving up all of its initial gains and then some. This love/hate relationship can be seen in the chart below. 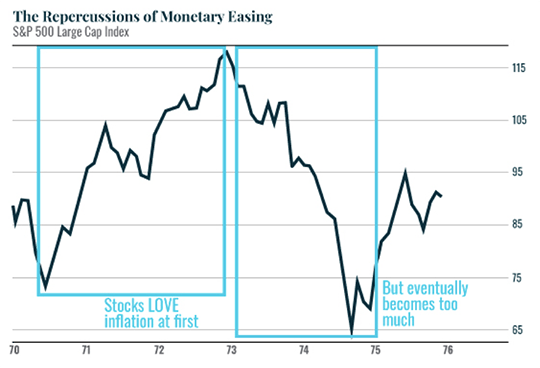 I expect a similar pattern to play out with stocks when the Fed implements its next round of monetary easing. We’ll likely see a blow off top, followed by a sharp drop.

Stocks Will Hold Up a Week of Two More, Then Look Out

Stocks have at most two to three weeks before the “floor comes out” beneath this rally. That’s the bad news. Lucky for us, I also have some good news…