Yesterday, we discussed what happens when the Fed follows the European Central Bank (ECB) in the next round of easing.

Specifically, we noted that gold as an asset class will outperform, while stocks will initially rally hard, then fall.

We saw this in the early 1970’s right after then-President Richard Nixon took the U.S. off the Gold Standard. Stocks erupted higher as inflation rose from 1971-1973.

However, once inflation began to spiral out of control, the stock market plunged, giving up all of its initial gains and then some. This love/hate relationship can be seen on the chart below. 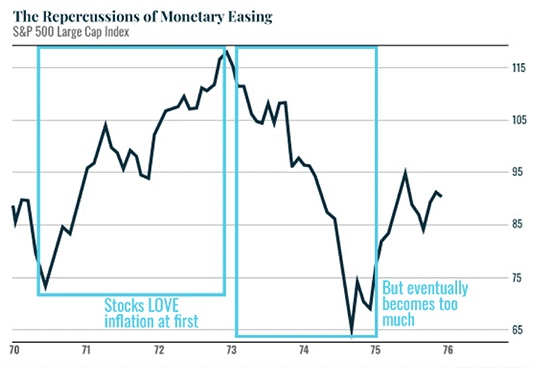 I expect a similar pattern to play out with stocks when the Fed implements its next round of monetary easing. We’ll likely see a blow off top, followed by a sharp drop.

In fact, this process may already be underway…

Stocks are Moving Toward Upside Target

Stocks have erupted higher this year on promises from the Fed that aggressive monetary easing is coming.

In the larger picture, the S&P 500 is in a clear uptrend channel (orange lines on the chart below).

The eventual upside target for this run will be somewhere around 4,000 if we go to test that top trend line. We’d likely reach this sometime in mid to late 2020. 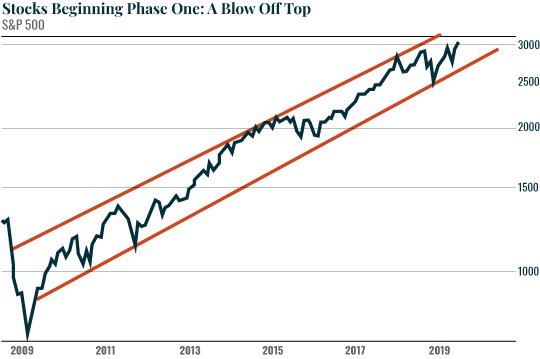 That would be the blow off top. After that would come the sharp drop as inflation took hold of the financial system, eating into profit margins.

Those who pick the ride side of these trades could generate literal fortunes.

The door is now open to MASSIVE returns for traders. Allow me to explain…