The transition to taking over the Fed would not happen all at once. Instead, the first option would be to demote current chair Jerome Powell and replace him with someone else.

That someone would likely be St. Louis Fed President James Bullard.

Indeed, the President quoted Bullard yesterday after the Fed’s screw-up resulted in the market falling hard: 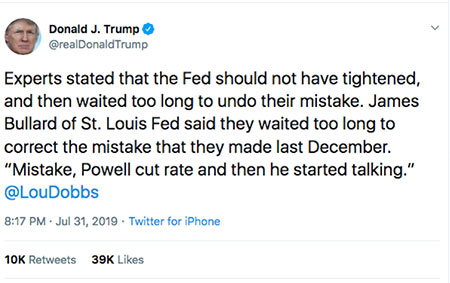 Moreover, Bullard hinted at the move just two weeks ago:

St. Louis Fed President James Bullard told reporters Friday that he would be interested in becoming chair of the Federal Reserve, but says he has not been called on for a position.

“Fed chair is, of course, something I’d love to do,” Bullard said. “I’ve been in the Fed all my life, all my professional career, and if I ever got that honor I would certainly take it.”

Bullard added that his phone “hasn’t been ringing off the hook to get” the Fed job, and that “the stars have to align for that to happen.”

Source: Yahoo! News. [Emphasis my own.]

Remember, Bullard could never admit he’s been offered the job already. Doing so would create a media circus.

One of the Trump administration’s favorite strategies for introducing a controversial idea is to leak it to the media little by little over the course of a prolonged period. They do this so that by the time the actual legislation is introduced, the general public has already gotten comfortable with it.

They did this with the Tax Plan, the Border Crisis, and it now appears as if they’re doing it with the Fed by preparing for Jerome Powell’s departure and his replacement with James Bullard.