As I noted yesterday, the transition to taking control of the Fed would not happen all at once. What the President really wants is to force the Fed to ease policy aggressively.

Thus far the Fed has failed to fall in line.

While this technically represents a move towards easing, it wasn’t nearly as much as the 0.5% rate cut the President and his advisors have been clamoring for in the media.

The President immediately voiced his frustration on the issue: 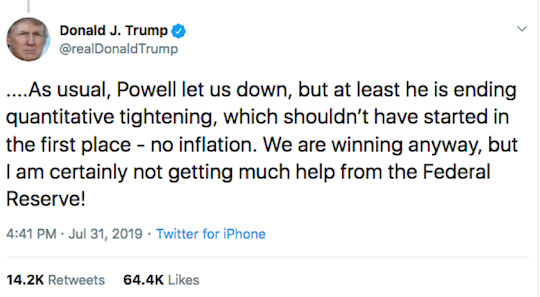 Sensing that the Fed wouldn’t kowtow to political pressure, the President then chose a different route to get the desired outcome…

Using the Trade War to Force the Fed’s Hand

On Thursday, President Trump announced the U.S. will soon be implementing an additional 10% tariffs on some $300 billion of Chinese exports to the U.S.

The stock market cratered on the news, shown below. 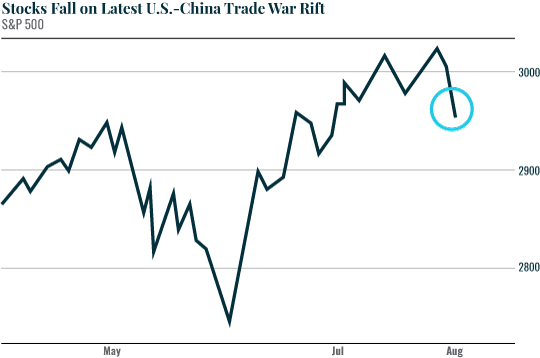 It’s simple. If the Fed won’t ease monetary policy aggressively based on political pressure, the President will use geopolitics.

The fact is that the U.S.-China trade deal has been dead since mid-June. So for the President to increase tariffs now suggests he is looking to force the stock market to fall, thereby inducing the Fed to start an aggressive easing cycle.

Will it work? We’ll soon find out.

The doom-and-gloom crowd are getting taken to the cleaners…