As I noted on Friday last week, President Trump has decided to force the Fed to ease monetary policy via geopolitics ⁠— specifically the trade war with China.

For months, the President has been calling for the Fed to ease monetary conditions. On Wednesday last week, the Fed cut rates by 0.25%, well below the 0.5% rate cut the President and his advisors have been clamoring for in the media.

The President immediately voiced his frustration on the issue: 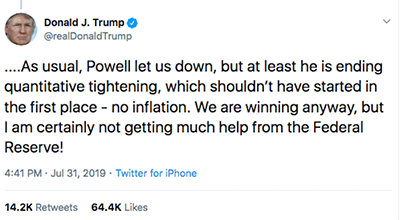 Sensing that the Fed wouldn’t kowtow to political pressure, the President then chose a different root to get the desired outcome: worsening the trade war.

To that end, on Thursday the President announced the U.S. will soon be implementing an additional 10% tariffs on some $300 billion of Chinese exports to the U.S.

The stock market cratered on the news, shown in the chart below. 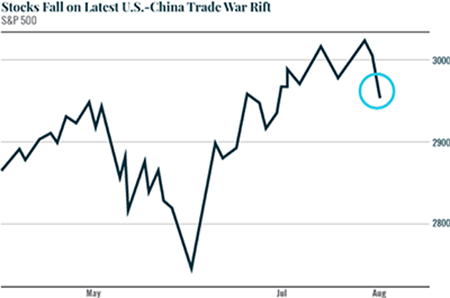 The question now is how far will U.S. stocks fall before the Fed is forced to step in?

China has the answer.

If President Trump continues down the current path he’s on, I expect we’ll see U.S. stocks play “catch up” to China’s stock market in no time. This would mean the S&P 500 falling to 2,400 or so. This can be seen in the chart below. 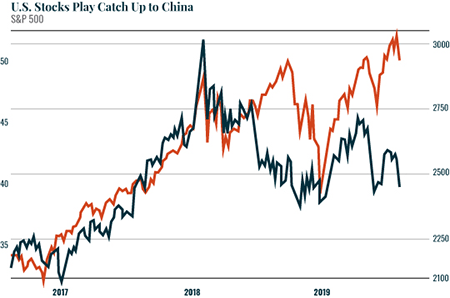 I expect around that level the Fed will be forced to buckle and start easing more aggressively.

Will it work? We’ll soon find out.