Trump’s Plan to Force the Fed to Ease

As I noted yesterday, President Trump has decided to force the Fed to ease monetary policy via geopolitics — specifically the trade war with China.

For months, the President has been calling for the Fed to ease monetary conditions. On Wednesday last week, the Fed cut rates by 0.25%, well below the 0.5% rate cut the President and his advisors have been clamoring for in the media.

The President immediately voiced his frustration on the issue, blaming the Fed for doing a poor job. He then took matters into his own hands, using the trade war with China to hurt the markets.

Put simply, President Trump has figured out that the Fed won’t kowtow to political pressure. So he’s going to use the Trade War with China to get the desired outcome: forcing the Fed to ease monetary policy.

To that end, on Thursday President Trump announced that the U.S. will soon be implementing an additional 10% tariffs on some $300 billion of Chinese exports to the U.S.

The stock market cratered on the news, shown in the chart below. 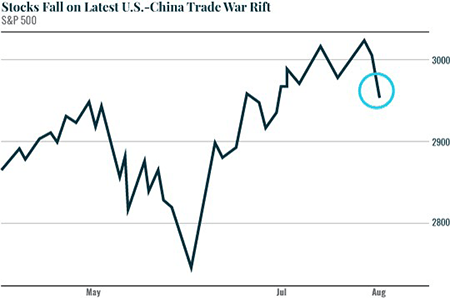 It’s only going to get worse from here.

Last night, the Treasury officially labeled China a “currency manipulator.” This opens the door to legal and monetary retribution by the U.S. against China. Which means…

The trade war is about to heat up, quite badly. And the Fed will soon be forced to ease monetary conditions.

The biggest impact will be on the currency markets. The days of small currency moves are over. We’re going to see significant currency volatility going forward as every Central Bank in the world is forced to take action to prop up or devalue its currency.

Those who are able to accurately trade this environment could generate literal fortunes.

To find out more about this incredible system…

The days of fast big gains are OVER for stock investors. So where do you need to look if you’re interested in double- or triple-digit gains that can be made in a week or so? I’ll tell you.

Is the Fed Part of the “Deep State” Coup Against the President?

Does the Fed have ulterior motives? Let’s take a look…