Yesterday, China devalued the yuan against the U.S. dollar, pushing the exchange rate between the two currencies to an all-time low level over 7.14 (meaning each U.S. dollar is worth over seven yuan).

This is a MASSIVE deal.

First and foremost, this has never happened before. Ever since China entered the World Trade Organization (WTO) in 2001, the country has stopped its currency from devaluing too aggressively against the U.S. dollar.

At times, this has required China to intervene in the currency markets to prop up its currency (blue circles in the chart below). 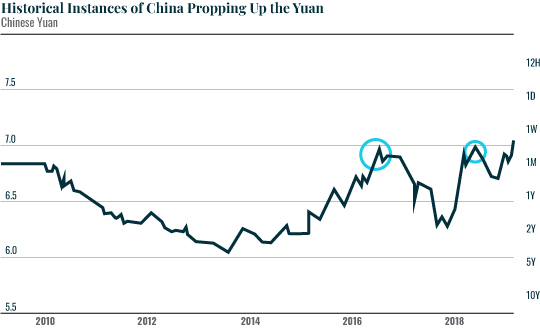 China did this as an act of “good faith” with the U.S., stopping its currency from collapsing and exporting deflation into the U.S. financial system.

China let the yuan breach the all-important level of seven against the U.S. Dollar yesterday as a “warning shot” to the Trump administration that China is done playing around.

This is why stocks collapsed yesterday – falling almost 4% in a single day. It was only through direct intervention that the market bounced in the late afternoon, shown below. 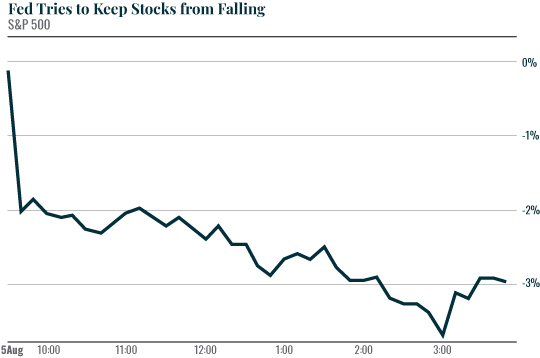 As a reaction to this, the Trump administration officially labeled China a “currency manipulator” for the first time in 25 years last night.

What does this mean?

Moreover, the two largest economies in the world – the United States and China – are not openly hostile towards one another.

This will have profound implications for the financial markets. We will see crashes as well as “rip your face off” rallies.

Those who are able to accurately trade this environment could generate literal fortunes.

And we just two new winners on Monday: a 15% gain and a 16% gain that we only held for four hours!

To find out more about this incredible system…

Thus far, we’ve focused on the Fed’s side of this war. Today we’re going to look at President Trump’s “plan of attack.”