As I noted yesterday, the Currency Wars are finally here.

With the U.S. now formally labeling China a “currency manipulator,” it’s only going to get worse.

This means that central bank monetary interventions will soon be the only means through which countries can prop up their economies. I fully expect to start seeing surprise interest rate cuts, asset purchase programs, and other interventions as central banks begin a process of “competitive devaluation” with their currencies.

Indeed, this is already happening. On Wednesday, central banks in Thailand, New Zealand, and India all surprised the markets with unexpected interest rate cuts.

The problem with this kind of activity is that we live in a fiat-based world of paper money. Meaning, no currency is backed by anything finite like gold.

Which means your central bank will have to intervene in your currency to ensure that it’s not too strong.

Placing the U.S. Dollar Under the Microscope

Consider the U.S. dollar for instance. The Euro comprises 56% of the basket of currencies against which the U.S. dollar is valued. So if the Euro falls because the European Central Bank (ECB) devalues it, the U.S. dollar will rally – making the U.S. less competitive from a trade perspective.

You can see this in the chart below. The two currencies are nearly perfectly inverse of one another (Euro in orange, U.S. dollar in blue). 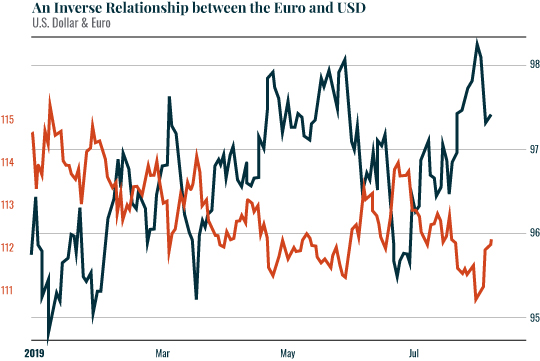 And this is happening regardless of any economic developments, geopolitical problems, or anything else.

What’s truly amazing? That same relationship plays out for every major currency: the Yen, the Australian Dollar, the British Pound, the Swiss Franc, etc.

Learning to Profit from the Global Currency Markets

ALL of these currencies are being impacted by their trading partners engaging in interventions through their respective central banks.

I can tell you that the opportunity here is the greatest I’ve ever seen in my lifetime. Volatility is a trader’s best friend. And with the right system, you can turn this kind of environment into a cash-generating machine.

With that in mind, I’ve spent the last six months developing a system for trading central bank interventions. I knew we were about to enter a currency war, and I wanted a system that would accurately predict when a central bank would intervene in its currency market.