It is Now a “Trader’s Market”

As I noted on Thursday, the Currency Wars are heating up.

Things worsened between the two nations yesterday, when the White House floated the idea of “ending China talks” and implementing sanctions on Beijing.

This comes just a few days after the U.S. labeled China a “currency manipulator” – a move that is sure to bring retaliation from China.

This scenario is going to lead to greater volatility in the markets. In the last few days alone we’ve seen much larger price swings occurring in stocks (red square in the chart below) than anything in the preceding three months (blue square). 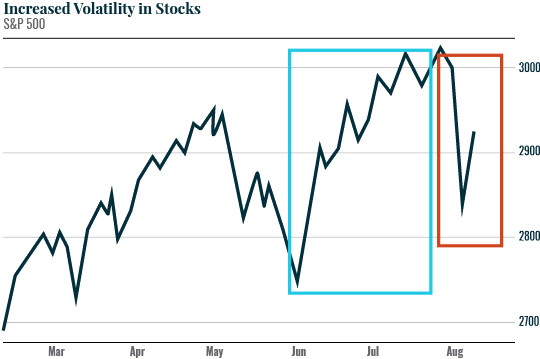 Put simply, this is what we in the business call a “trader’s market.”

Long-term investors like stability. They want stocks to slowly climb higher and higher to grow their portfolios.

Traders like volatility – phases in which the market swings wildly on way and another. For them, volatility means massive profits as they move in and out of the market

Consider this: If you were a long-term investor who owned stocks, you haven’t really made much money in the last year. Yes, stocks have risen sharply, but they’ve also fallen a lot too. So over the last 12 months, they’ve been mostly moving sideways (large blue rectangle in the chart below). 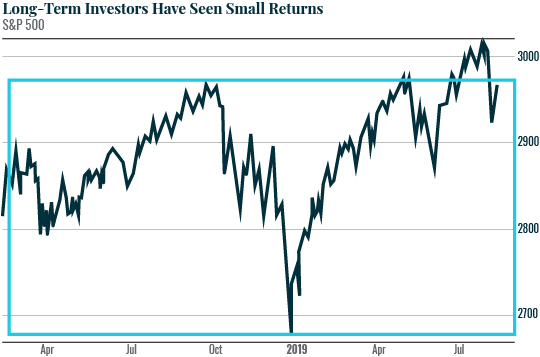 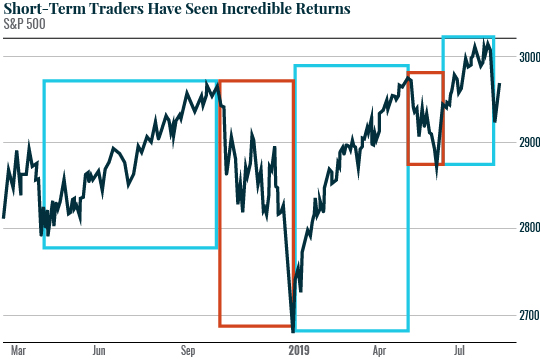 I can tell you that the opportunity here is the greatest I’ve ever seen in my lifetime. Volatility is a trader’s best friend. And with the right system, you can turn this kind of environment into a cash-generating machine.

With that in mind, I’ve spent the last six months developing a system for trading volatility in a truly unique way. I knew we were about to enter a currency war, and I wanted a system that would accurately predict when big price moves would hit so I could see massive returns QUICKLY.