As I noted on Friday, the Currency Wars are heating up.

If things continue to worsen, we can expect central banks to start getting involved directly in the markets.

Specifically, I mean massive currency interventions happening on a near weekly basis…

The Primary Role of Central Banks

The primary role of a central bank is to maintain a currency’s stability.

The reason for this is that when a currency rallies or falls too far too fast, it can have a devastating effect on businesses located in its economy.

For this reason, central banks are routinely forced to intervene in the markets. I’m not talking about major programs like Quantitative Easing (QE), but more “nudging” their currencies up or down to where they want them.

Consider the U.S. dollar for instance.

The Fed regularly intervenes in the financial system to move the U.S. dollar. Whether it’s by buying or selling assets from financial institutions, cutting or raising interest rates, or even verbal intervention, the Fed takes an active approach to keeping the U.S. dollar from rallying too much or falling too far. 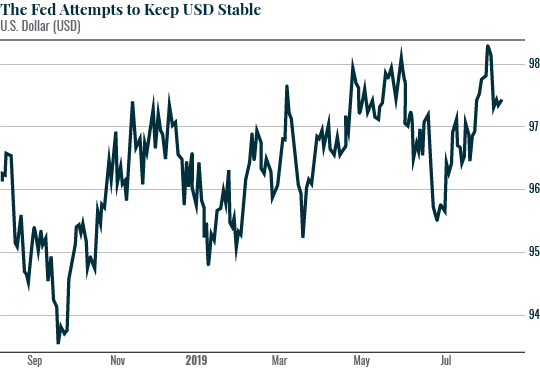 Because of this, if you know how to analyze central bank activities accurately, you can trade currencies in a way that can produce truly massive returns.

With that in mind, I’ve spent the last six months developing a system for trading volatility in a truly unique way. I knew we were about to enter a currency war, and I wanted a system that would accurately predict when big price moves would hit so I could see massive returns QUICKLY.