World War III just started – but the media missed it. Because the media needs to see tanks and armies to know there’s a war…

And unlike the last two world wars, this one won’t use bullets or bombs. It’s going to use currencies.

In a world in which every single major economy is completely saturated in debt, the next world war is going to be financial in nature.

Think of it this way: Physical wars are bloody, expensive, require bipartisan support, and are politically unpopular with the average person on the street.

Financial wars are NOT bloody. And the Powers That Be don’t even need Congress or Parliament to sign off on them.

All they need is to hurt another country’s currency…

A Collapsing Currency Spells Disaster for Its Country

You see, a country can run as much debt as it likes provided its currency holds up.

But once a currency starts to collapse, the fuse on the debt bomb is lit and the country rapidly enters a systemic collapse.

Take a look at Argentina on the chart below.

The country has a Debt-to-GDP ratio of 80%. It’s not as bad as Greece was in 2009 when the latter nation had a debt crisis, but it’s pretty high.

On Monday, the country had a major political upset in which the pro-business President was defeated in a landslide in a primary vote.

The Argentine Peso collapsed 20% in a SINGLE DAY. 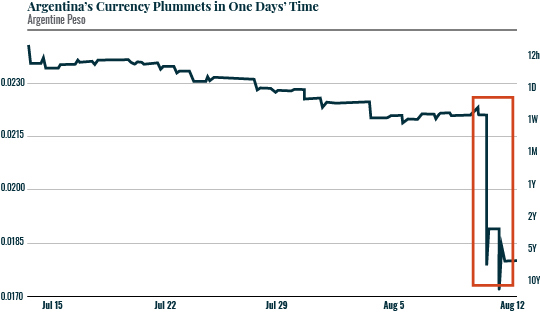 That same day, the odds of Argentina defaulting on its debts EXPLODED higher. The country is now a few days away from a full-scale financial crisis.

Now you get the general idea. In a world in which every major nation is sitting atop NUCLEAR levels of debt, currencies are the fuse that can ignite systemic collapse.

Put another way, if you can hurt your enemy’s currency, you can collapse the entire country’s debt-based financial system without firing a single shot.

I’m not saying I like this, nor that I’m happy this is happening… I’m simply telling you, THIS IS WHAT IS COMING TO THE WORLD.

Navigating the Currency Wars as an Investor

As a strategist, my job is to help my subscribers profit from whatever the market gives us.

So if the market gives us a financial-based World War III in which countries will use their central banks to blow up each other’s currencies, that’s the environment we need to navigate.

With that in mind, I’ve spent the last six months developing a system for trading currency moves based on the coming financial World War III.

I knew we were about to enter a currency war, and I wanted a system that would accurately predict when big price moves would hit so I could see massive returns QUICKLY.