Let’s wind back the clock a few months…

Starting in early June 2019, I began warning that the economy was beginning to roll over.

In particular, I noted that multiple real-world economic indicators – specifically the yields on the 10-Year Treasury, Copper, shipping company FedEx, and Oil – were warning that the U.S. stock market was due for a sizable correction.

The chart below, published June 14, 2019, illustrated that point. 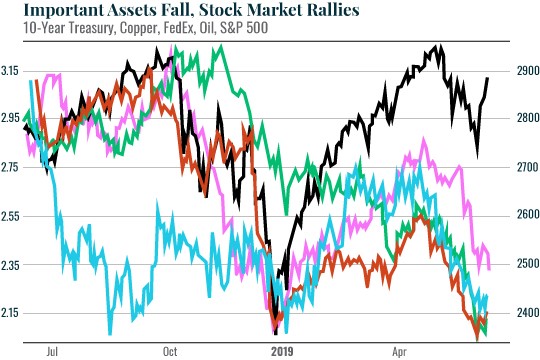 That same day, I recommended the iShares 20+ Year Treasury Bond ETF (TLT) as a means of playing this economic slowdown. Since that time, TLT has been like a rocket ship going straight up! 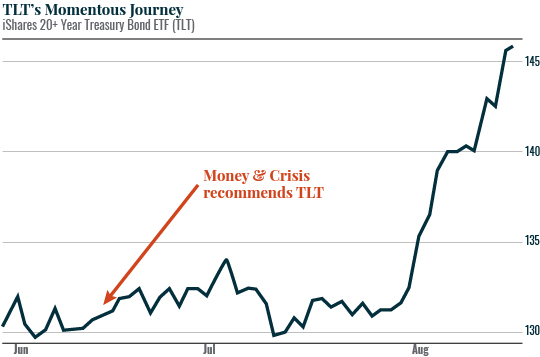 A few weeks later, on July 2, 2019, I warned that the Fed would disappoint the markets with its monetary decision at the end of July.

At that time, I recommended the UltraShort S&P 500 ETF (SDS) as a means of playing for a market drop after the Fed’s July meeting.

Why? Because the SDS was a leveraged play on the U.S. stock market collapsing.

Sure enough, the Fed disappointed the markets on July 31, 2019. And since that time, the SDS has been moving higher. And by the look of things, it’s got plenty of room to go. 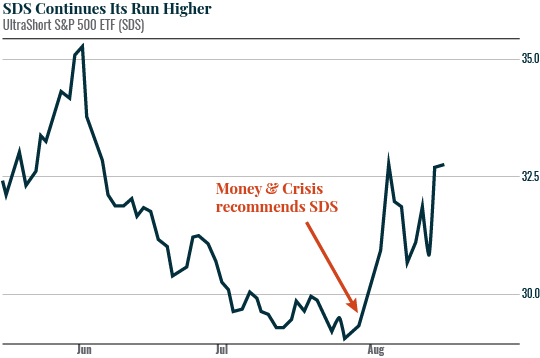 And finally, on July 26, 2019, I wrote that central banks would be forced to ease monetary policies going forward and that gold would be the big winner when they did.

Since that time, gold has soared over $100 per ounce. 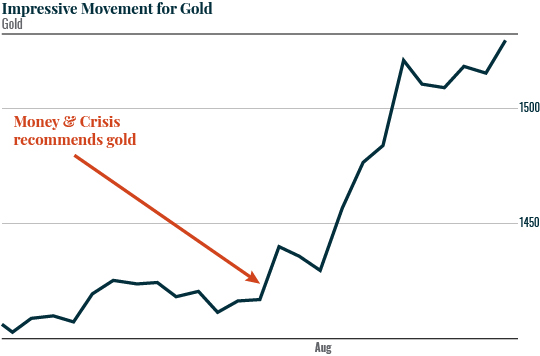 The bottom line: In the last three months, Money & Crisis has been calling the economic developments to near perfection. And even more importantly, we’ve been able to profit from these forecasts!

So what’s next on our radar?

Using the Currency Wars to Our Advantage

It is now clear that the global economy is weakening. As this happens, it will force central banks to start engaging in extraordinary monetary policies in order to prop up their financial systems.

These interventions are going to whipsaw these countries’ currencies as they engage in competitive devaluation against one another.

And therein lies the biggest opportunity in the markets today.

With that in mind, I’ve spent the last six months developing a system for trading currency moves based on central bank interventions.

I knew we were about to enter a currency war, and I wanted a system that would accurately predict when big price moves would hit so I could see massive returns QUICKLY.

Prepare for the new normal.

The Federal Reserve meets tomorrow and Wednesday of this week. The markets are forecasting the Fed will cut rates three times this year. If this proves to be the case, it will represent one of the most rapid U-turns in Fed policy in history.