Last week, I reviewed the investment ideas published in Money & Crisis over the last two months.

As a brief recap, we recommended:

I’m very pleased to say that all of these investments have risen dramatically since we recommended them.

With that in mind, I’d like to look ahead to the next 90 days in the markets.

First and foremost, gold will correct – possibly by a lot.

Long-term gold will prove to be a great investment based on central banks easing monetary conditions. But right now, the precious metal has come too far too fast. 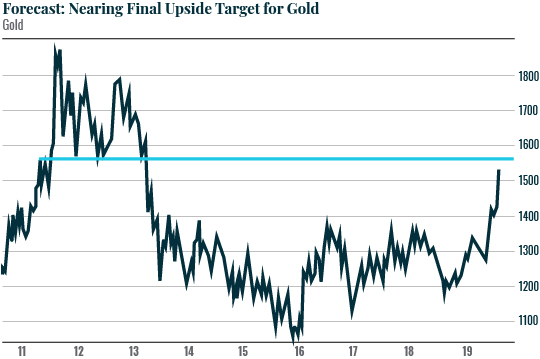 Treasury bond yields have fallen aggressively on fears of a global slowdown.

This move, like the move in gold, is overdone. The yield on the 10-Year U.S. Treasury has hit support around 1.5% (red line in the chart below). I expect we’ll see a bounce here on “good news” of some sort. 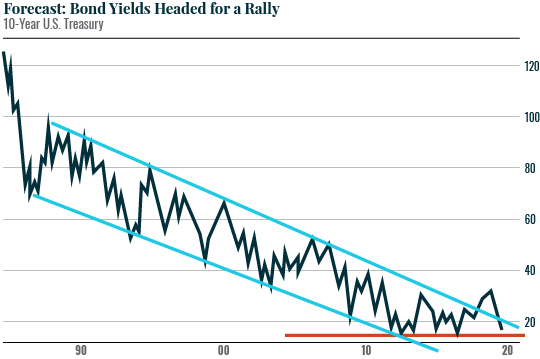 This will mean bond prices falling, bond yields rising. And a general “risk on” environment for anything priced based on bond yields.

Mind you, I’m singling out U.S. Treasuries here, but I expect German bonds and others to fall even MORE in value than Treasuries.

The stock market is following the long-term chart I showed clients back in June to perfection.

Stocks hit the upper trend line (top blue line in the chart below) and have since reversed. They’re now falling to test critical support (red line). I expect we’ll see a sizable bounce there, likely based on bond yields rallying (see forecast #2). 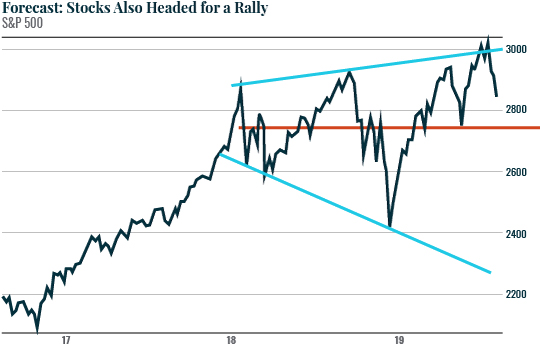 How to Profit When Currencies are Used as Weapons

The one caveat to all of this is if the currency wars get nasty.

The world is increasingly fragmented with each economy/region looking out for itself. Meaning, central banks are about to begin a war of competitive devaluation – devaluing their own currencies in an effort to gain a competitive advantage against their trading partners.

Just last week, the European Central Bank promised it was preparing a MASSIVE monetary program for its September meeting. This would force the Euro sharply lower.

At the same time, China is talking about devaluing the Yuan aggressively.

And then there’s the U.S., where there are rumors the Fed might surprise the markets with a MASSIVE 0.75% rate cut in September. This would force the U.S. dollar to collapse.

For most people this kind of stuff is scary. For subscribers of my currency trading system Alpha Currency Profits, it’s EXCITING!

Alpha Currency Profits was custom-made to trade currencies based on central bank interventions. And let me tell you, the results have blown me away.