As I noted yesterday, the markets are entering a “risk on” period.

Today we need to add a new component.

The prospect of a new tax cut from the Trump administration.

A Temporary Rally for Stocks

Yesterday, President Trump told ABC News that he is looking into a potential cut on capital gains taxes (taxes from investments) or a cut in payroll taxes (taxes employers pay to the government).

Either one of those would be a boon to the stock market. The first (capital gains) would reduce the taxes investors pay on profits, thereby making investing in the stock market more attractive.

In contrast, a payroll tax cut would boost corporate profits as it would reduce operating costs for U.S. businesses.

Put simply, we now have a third driver for the “risk on” move in the markets. And it’s the hope of a potential tax cut from the Trump administration.

This will likely see stocks move to test their recent highs at 3,050 or so. 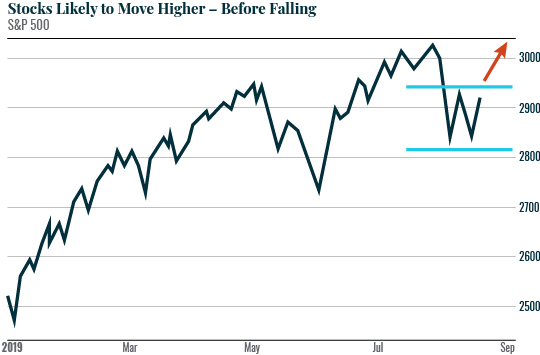 However, after that, things will begin to worsen in the markets.

Taking Advantage of a Global Breakdown

The situation outside the U.S. is worsening rapidly.

China is on the verge of a banking crisis.

Europe is moving back into recession.

And it is looking increasingly as if a Hard Brexit (meaning there is no agreement in place when it happens) is coming in October.

This means stocks have at most two to three weeks before the “floor comes out” beneath this rally.

The good news is that as soon as stocks begin to break down again, central banks will move to intervene directly in the markets. And when they do, the opportunity for traders will be ENORMOUS.

For most people, this kind of stuff is scary. For subscribers of my currency trading system Alpha Currency Profits, it’s EXCITING!

Alpha Currency Profits was custom-made to trade currencies based on central bank interventions. And let me tell you, the results have blown me away.

Ben Bernanke Just Gave Us the Blueprint for What’s Coming

Pretty soon, the Fed is going to monetize EVERYTHING. Allow me to explain…