As I’ve noted over the last few days, the markets are entering a “risk on” period.

Today I want to assess why this “risk on” rally will end in a few weeks.

The answer is: THE FED.

Warning #1: The Fed is NOT About to Ease

Yesterday, the Fed released the notes from its July meeting. This was the meeting at which the Fed cut rates by a disappointing 0.25% – instead of the 0.5% Wall Street and the Trump administration had requested.

The minutes were NOT good.

First and foremost, the minutes revealed that most of the Fed’s voting members considered the July rate cut to be a “mid-cycle adjustment.” What this means is that the rate cut was NOT the start of an aggressive easing cycle. Instead, the Fed is likely “one and done” with rate cuts for now.

The Fed’s minutes also reveal that several Fed members favor “keeping rates on hold.” This means that there was more than one Fed member who didn’t want to even cut rates in July!

How will this affect the stock market? And why would this mean stocks collapse in a few weeks?

The Fed’s next meeting takes place September 17-18. Based on what the Fed revealed yesterday, the odds of the Fed cutting rates during this meeting are next to none.

Put another way, investors are completely delusional about what the Fed intends to do. And this is going to lead to a major disappointment in a few weeks when the Fed fails to cut rates at its September meeting.

This means stocks have at most two to three weeks before the “floor comes out” beneath this rally.

The good news is that as soon as stocks begin to break down again, central banks will move to intervene directly in the markets.

You see, the Fed WILL start easing again – but only once the stock market collapses. The below chart shows the level at which the Fed will finally be forced to take action. 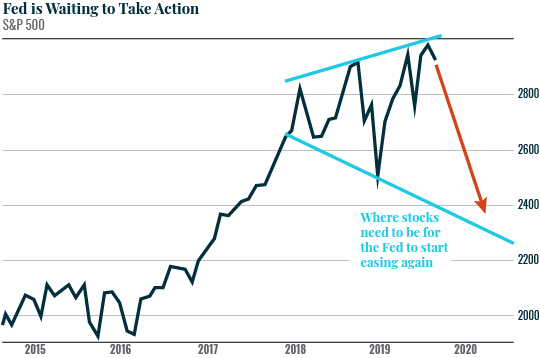 Those who trade this effectively stand to make literal fortunes.

And as exciting as that is, the opportunity in the currency markets will dwarf even that of the stock markets.

Indeed, even Warren Buffett, who claims to be a “stocks only” investor, made most of his biggest investments based on what was going to happen in the currency markets (a weak U.S. dollar).

Put simply, if you are looking for HUGE gains, currencies are where you need to look.

With that in mind, my proprietary trading system, Alpha Currency Profits is already using the currency markets to lock in massive returns in every other week.