Over the last week, I’ve outlined that the stock market is preparing for a large move down.

To provide some insight into why this is, today I’d like to give a “Big Picture” perspective of what’s happening in the financial system.

Yes, central banks want stocks to rally because this distracts investors from larger, more systemic issues. But the bond market is their primary focus.

As I outlined in my bestselling book The Everything Bubble: The Endgame For Central Bank Policy, the bond market is what allows governments/countries to continue to finance their massive social spending programs. Without their ability to issue cheap debt, most countries would go bust in a matter of weeks.

Think of it this way: If stocks fall a lot, some investors go broke. But if the bond market falls a lot, entire countries go bust.

This is precisely what started to happen in 2018. 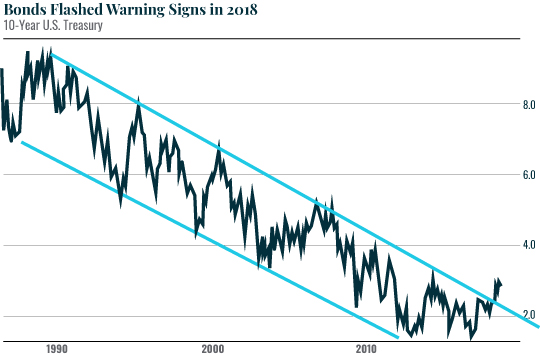 This is what caused the Fed to panic. It quickly realized that if Treasury yields continued to rise, it was only a matter of time before the U.S. experienced a debt crisis.

As the below chart reveals, thus far this strategy has worked. 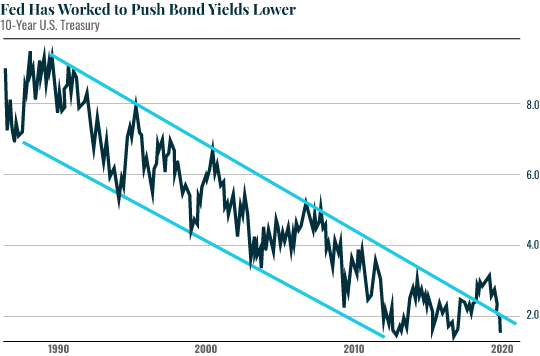 I bring all of this up because every central bank on the planet is currently doing what the Fed did back in late 2018: panicking and attempting to force capital into bonds.

Today I’ve focused on U.S. Treasuries, but every major nation – whether it be Germany, Japan, Switzerland, or the U.K. – has its own central bank that is desperate to force its country’s bond yields lower.

And this has set the stage for one of the greatest profit making opportunities of all time.

You see, as central banks ease monetary conditions to force capital into their bond markets, it’s going to result in EXTREME volatility in the currency markets.

If you’re looking for above average returns today, the market is telling you that the clearest trade is to be long precious metals.