Yesterday, I outlined the “Big Picture” perspective of what’s happening in the financial system.

That “Big Picture” is as follows:

To central banks, the single most important asset class in the world is bonds, NOT stocks.

Stocks get a lot of attention from the financial media because they are more volatile and therefore offer the opportunity for faster gains. However, as far as central banks are concerned, stocks are relatively unimportant.

Put simply, stocks give investors a means of getting rich.

Bonds give entire countries a means of remaining solvent.

Which is why globally, central banks are going to sacrifice stocks in order to benefit bonds.

Now, I’m not saying this will happen in the next 24 hours. But I am telling you that this will be a MAJOR issue later this fall.

You see, the reality is that globally, the economy is slowing down. Normally under these conditions, countries would issue more debt to “soften the drop” via additional social spending/welfare programs.

However, most nations are already totally saturated with debt. All told, the world’s debt-to-GDP ratio is well over 225%, meaning there is more than twice as much debt as there is economic output in the world.

The only way this situation can be continued is if central banks continue to force interest rates lower in order to lower their respective country’s debt payments.

Central Banks Will Sacrifice Stocks to Save Bonds

Central banks HAVE to force bond yields lower – whether it be by cutting interest rates or implementing Quantitative Easing programs (programs through which central banks buy debt directly).

So if things start to get messy, central banks will need to come up with capital in order to force bond yields lower.

The easiest way to do this? Crash stocks – thereby driving capital out of the stock market and into bonds.

The stock market knows this too, which is why it’s forming an expanding pattern that tells us new lows are coming for stocks (shown below). 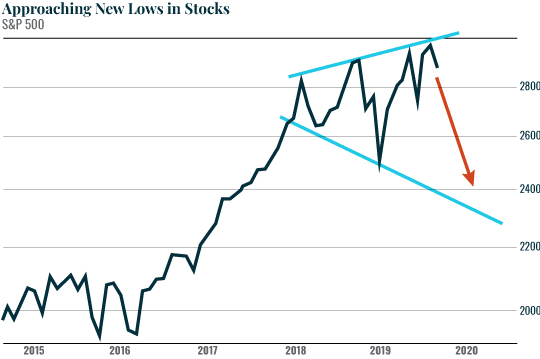 This has set the stage for one of the greatest profit making opportunities of all time.

You see, as central banks ease monetary conditions to force capital into their bond markets, it’s going to result in EXTREME volatility in the currency markets.