Yesterday, I noted that three former central bankers were openly advocating for central banks to implement “helicopter money” during the next economic downturn.

Helicopter money consists of the Fed printing money and funneling it directly into the economy by either:

The idea of helicopter money has been floating around economic circles for years, but to my knowledge this is the first time we’ve seen three former central bankers openly calling for it.

These central bankers are:

Put simply, these are three HIGHLY connected and influential former central bankers. In this regard, their article can be considered a blueprint for what’s to come as far as central bank policy during the next economic downturn.

Now, the big question is, “how do you profit from this?”

The simplest answer for “buy and hold” investors is: buy gold.

Gold: A True Store of Money

You’ll note that gold has exploded higher against all three currencies right around the same time: mid 2019. 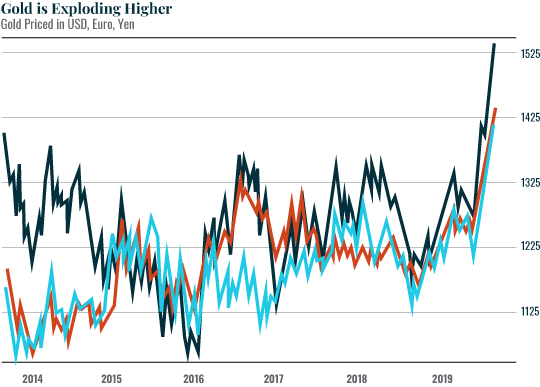 It is not coincidence that gold did this around the time central banks began talking about introducing extreme monetary pressures. In a world in which every central bank wants to devalue its currency, gold represents one of the true stores of money that can’t be devalued.

However, if you’re looking for larger, faster gains, helicopter money is going to represent a “trader’s paradise.”

You see, as central banks begin to implement helicopter money, it’s going to result in EXTREME volatility in the currency markets.

If you know how to analyze central bank activities accurately, you can trade currencies in a way that can produce truly massive returns.