Today I’m revisiting an event to make sure you’re up to speed on what’s been happening in the markets.

In early August, China devalued the yuan against the U.S. dollar, pushing the exchange rate between the two currencies to an all-time low level over 7.14 (meaning each U.S. dollar is worth over seven yuan).

First and foremost, this has never happened before. Ever since China entered the World Trade Organization (WTO) in 2001, the country has stopped its currency from devaluing too aggressively against the U.S. dollar.

At times, this has required China to intervene in the currency markets to prop up its currency (blue circles in the chart below). 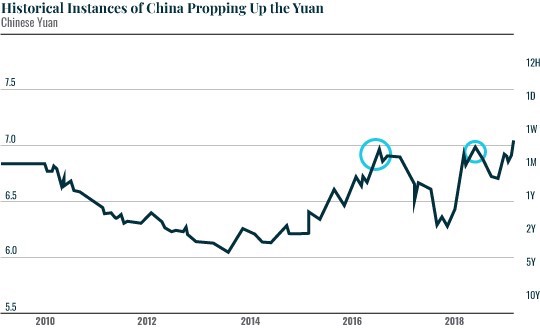 China did this as an act of “good faith” with the U.S., stopping its currency from collapsing and exporting deflation into the U.S. financial system.

China Sent a “Warning Shot” to the U.S.

China let the yuan breach the all-important level of seven against the U.S. Dollar in August as a “warning shot” to the Trump administration that China is done playing around.

This caused stocks to collapse – falling almost 4% in a single day. It was only through direct intervention that the market bounced later that day, shown below. 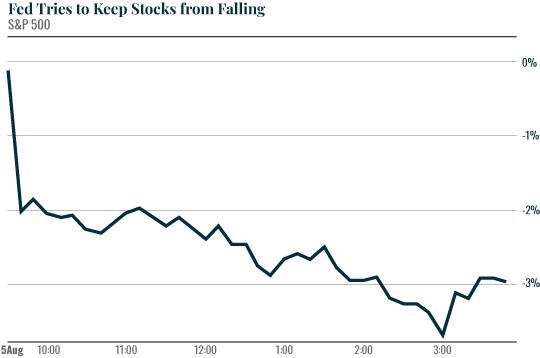 As a reaction to this, the Trump administration officially labeled China a “currency manipulator” for the first time in 25 years last night.

What does this mean?

Of course, that might sound strange – especially if you’re a new reader of Money & Crisis.

To understand how a country can use its currency as a weapon, we need to take a closer look at central banks…

The Primary Role of Central Banks

The primary role of a central bank is to maintain a currency’s stability.

The reason for this is that when a currency rallies or falls too far too fast, it can have a devastating effect on businesses located in its economy.

For this reason, central banks are routinely forced to intervene in the markets. I’m not talking about major programs like Quantitative Easing (QE), but more “nudging” their currencies up or down to where they want them.

Consider the U.S. dollar for instance.

The Fed regularly intervenes in the financial system to move the U.S. dollar. Whether it’s by buying or selling assets from financial institutions, cutting or raising interest rates, or even verbal intervention, the Fed takes an active approach to keeping the U.S. dollar from rallying too much or falling too far. 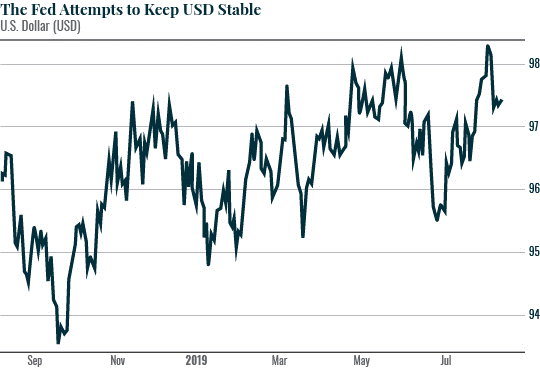 Because of this, if you know how to analyze central bank activities accurately, you can trade currencies in a way that can produce truly massive returns.

This is a driving theme behind Money & Crisis – and I’ve even dedicated an entire research service to profiting from it.

I’ve spent the last six months developing a system, Alpha Currency Profits, for trading volatility in a truly unique way. I knew we were about to enter a currency war, and I wanted a system that would accurately predict when big price moves would hit so I could see massive returns QUICKLY.